Scientists have recorded a supernova explosion 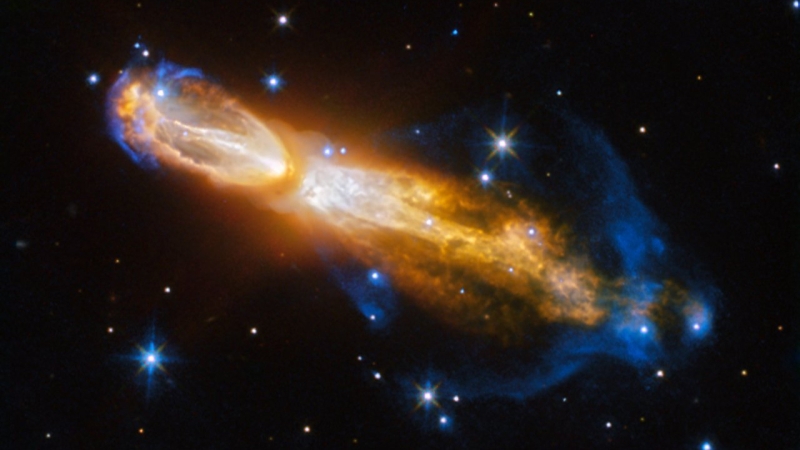 Scientists first managed to see the supernova in the first hours after her birth and to see how the shock wave accelerates the electrons in the ejected remains of stars. Supernova flash so bright that you can see them from the other end of the Universe, but they normally have time to destroy part of their own emissions in the moment when we see them. Therefore, these observations are so valuable – we first saw the gas shell surrounding a dying star, says study Norbert Langer of the University of Bonn (Germany).

Supernovae erupt as a result of gravitational collapse of massive stars, when the heavy core of the star shrinks and creates a wave off the emitted light substance outer layers of the star into space. This produces a glowing gas of the nebula, which continues to expand for some time after the explosion. Supernovae of the first type are formed in the explosion of a binary system of white dwarf and a more massive star, and more widespread outbreaks of the second type — the explosion of giant stars.

In recent years, scientists have recorded hundreds of new supernovae and actively studied and their outbreaks, which helped us learn a lot about the birth of the elements heavier than iron, how could the Solar system and what role do supernovae play in the evolution of galaxies and the birth of stars in them. However, the mysteries of supernovae remain a mystery to astronomers, as they are usually found a few days after the outbreak, and when the shock wave propagating from the center of a supernova through her entire nebula was able to destroy part of the outer shells of the dead star.

Ofer Yaron from the Institute of science Weizmann in Rehovot (Israel) took the first step to uncovering these secrets, getting photos, and first spectral data on supernova iPTF 13dqy that erupted in the constellation Pegasus in the galaxy NGC 7610 just three hours after her birth. It is located relatively close to the milky Way, just 160 million light years, which has allowed scientists to study in detail the outburst using a telescope Swift and ground-based Palomar Observatory.

Itself iPTF 13dqy is a common supernovae of the second type, erupted in the night sky October 6, 2013. Due to the fact that it was able to quickly detect, scientists have been able to consider a gas shell dropped its progenitor in the last few million years of life before death. 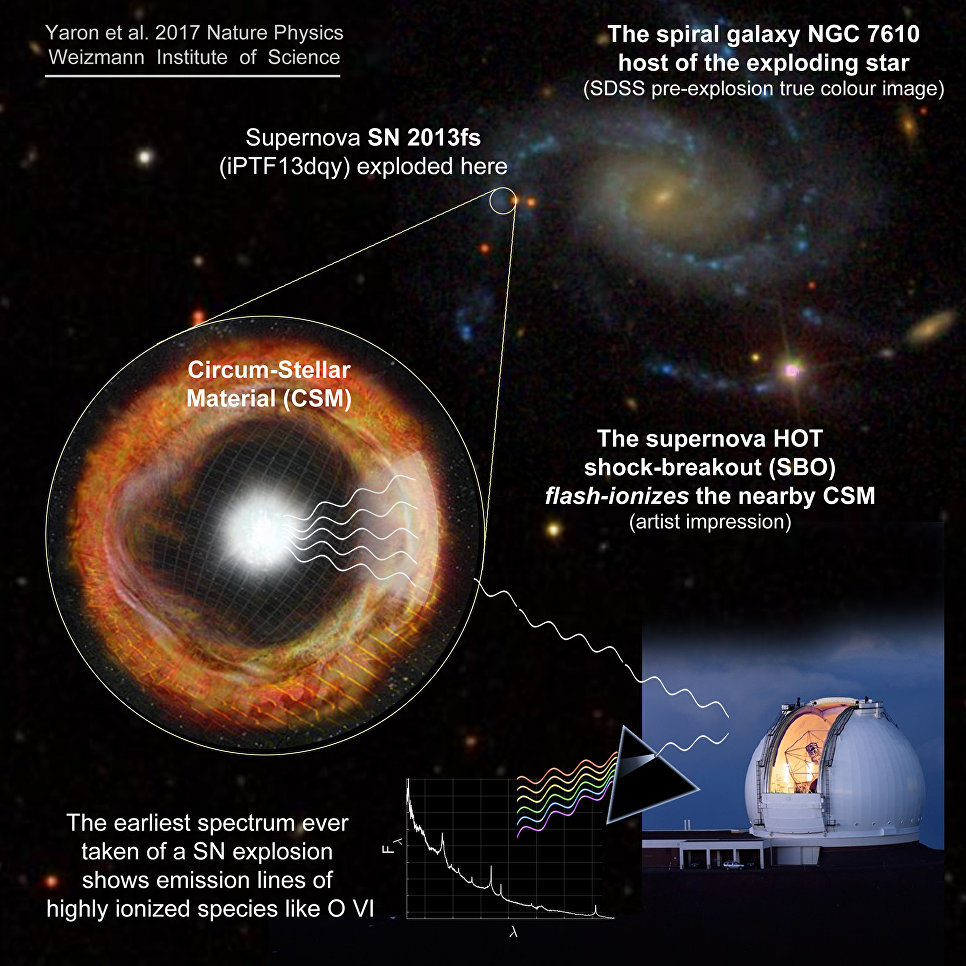 These shells, as they say scientists, are the source of the most powerful flares, caused by a supernova. The gas in them is faced with a shock wave emanating from the bowels of a dying star and is heated to extremely high temperatures, causing the escape of electrons from atoms and generate powerful beams of ultraviolet light and other types of electromagnetic waves. The strength, duration and other characteristics of this radiation depend on the device shells of the former stars, thanks to Yaron and his colleagues were able to see its structure, by observing oscillations in the brightness of individual lines in the spectrum of the iPTF 13dqy in the first hours of its existence.

These observations showed that the diameter of this ball of gas and dust is large enough – about 20 light minutes, or about 360 million kilometers. This distance corresponds to approximately the same distance where is the main asteroid belt between Jupiter and Mars relative to the Sun. All traces of this structure were to disappear about 10 days after the explosion of a star and the shock waves reach the furthest corners of her cocoon of gas and dust.

The existence of this structure of gas and dust indicates that in the last year of his life, dying star threw a record large amounts of gas and dust in the surrounding space, losing about 0.1% of the mass of the Sun during this time. This was possible, as scientists believe, only in the case if the bowels of the star was very unstable in the last days of her life.

The presence of such relationship between emissions and the processes within the stars that lead to the explosion that may help astrophysicists more accurately predict how supernovae explode and how fast will explode closest to Earth candidate for such a role – the red supergiant Betelgeuse in the constellation Orion from Earth only 640 light years. As I hope the researchers, the discovery of other early supernovae would clarify the issue.