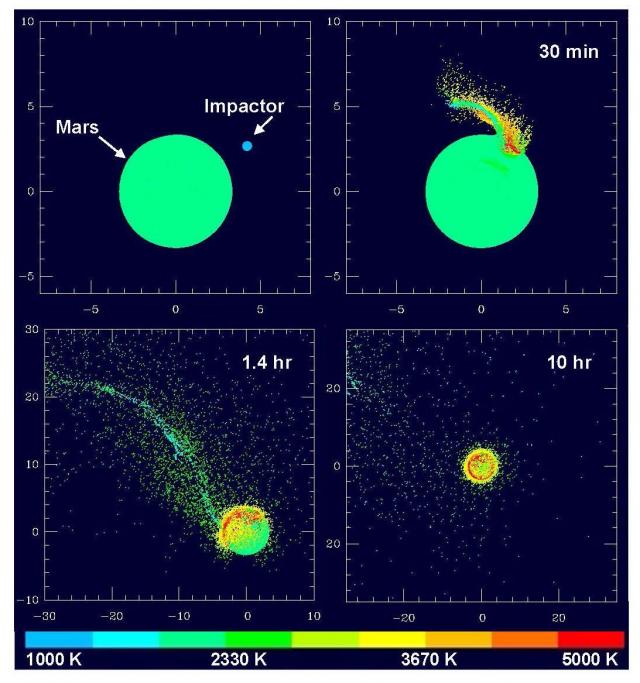 The Martian satellites Phobos and Deimos appeared as a result of the collision of Mars with a large, but not giant, object. These are the results of a study conducted by specialists from the Southwest Research Institute.

Bombarded several billion years ago, the Red Planet object was not as large as an object that collided with the Earth and caused the formation of the Moon. Scientists believe that the heavenly body that collided with Earth was the size of Mars.

At present, there are several theories explaining the appearance of Phobos and Deimos, however, according to the scientists of the Southwest Research Institute, none of them have up to this point been backed up by data obtained on the basis of computer modeling.

According to the calculations of specialists, the object encountered with Mars should have a diameter from 525 km to 950 km. By the size it was comparable with such asteroids as Vesta and Ceres.

According to the simulation, two satellites were formed from the material ejected from the collision of the asteroid with Mars, therefore, basically, in composition, Phobos and Deimos should resemble the Red Planet.

Due to the fact that the collision led to extreme temperatures, and the attraction of Mars is weak, the water vapor most likely disappeared upon impact. Therefore, if the new model is correct, Phobos and Deimos should be deprived of water.

Previous hypotheses were based on the fact that Mars collided with a giant object, however, as modeling showed, in this case larger satellites should appear. Formed in a collision with a giant object, disks of matter would not allow the formation of such small satellites as Phobos and Deimos, which have a diameter of 22 and 12 km.