Scientists have solved the mystery of Jupiter’s hexagonal storms 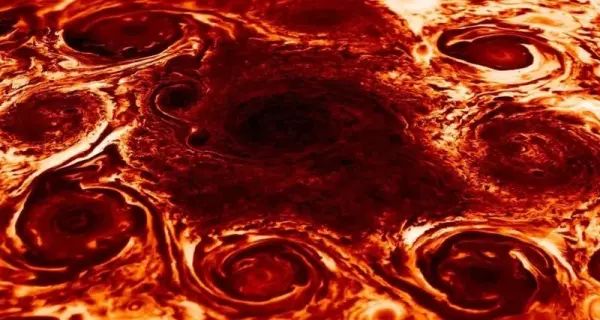 Astronomers have announced that they have finally figured out the nature of the strange rotating vortices at the poles of the giant planet.

Jupiter is widely known for its carnival of chaotic clouds and violent winds. Since the Juno space probe arrived in orbit of the gas giant in 2016, scientists have gained unprecedented access to a dataset that has helped them understand the nature of the planet’s wild weather.

But along with answers to old questions, Juno’s data has spawned many new ones. Previously, we were unable to properly consider the poles of Jupiter. However, the space probe witnessed a stunning picture: near-perfect storm polygons surrounded a colossal hurricane in the central part.

At the north pole of Jupiter, nine cyclones rage, one in the center, and eight others neatly arranged around it. Everyone rotates counterclockwise.

At the South Pole by 2016, there were six cyclones: again one in the center and five around it. The seventh storm joined them sometime in 2019, so there are now as many as six hexagonal eddies in the south that surround the central storm. These storms rotate clockwise.

Since 2016, these enormous cyclones – comparable in size to the continental United States – have continued to exist autonomously, without a single merger attempt. In a new article, scientists announced that they have finally found the cause of this mysterious phenomenon.

Jupiter’s climate is not like that of another gas giant, Saturn, which has just one huge storm at each pole. It also does not resemble the Earth’s climate – on our planet, most cyclones form in tropical latitudes and drift to the poles, but dissipate over land and cold ocean zones before reaching them.

Since Jupiter has no dry land or cold oceans, it makes sense that its storms would behave differently than on Earth. But the question remains – why do they not merge to form a single cyclone like on Saturn?

Astronomer Cheng Li of the University of California, Berkeley and colleagues at the California Institute of Technology performed numerical simulations of storm configurations and found a set of conditions under which they can remain discrete and stable over long periods of time without merging into megastructures.

“We found that the stability of the structure mainly depends on the protection – the anticyclonic ring around each cyclone – but also on its depth,” the researchers write in their paper.

“Too little shielding and shallow depths lead to fusion and loss of the polygonal pattern. Too strong shielding causes the cyclonic and anticyclonic parts of the eddy to separate. But the intermediate state leads to the appearance of stable polygons. ”

The team used equations describing the motion of a single layer of fluid on a sphere and simulated a polygonal arrangement of the vortices. This is not a new approach, but the scientists have incorporated polar geometry and beta drift in their models – the tendency of cyclones to drift due to the increase in Coriolis force with latitude due to wind speed.

The greatest impact on the strength of a hurricane is a phenomenon known as vortex protection. It occurs when a vortex – in this case our cyclones of Jupiter – is surrounded by a ring moving in the opposite direction. Thus, each of the cyclones moving counterclockwise at the North Pole is surrounded by a powerful wind blowing clockwise around the cyclone.

If this shielding is too weak, the storms will merge. If it is too powerful, the storm and its “shield” will scatter from each other, leading to complete chaos.

However, now a number of new mysteries arose before researchers. How exactly do hexagonal storms form? Why doesn’t the number of cyclones increase over time? In the future, a whole series of virtual experiments will be needed to answer these and other questions.