Scientists have solved the mystery of the unusual clouds on Mars 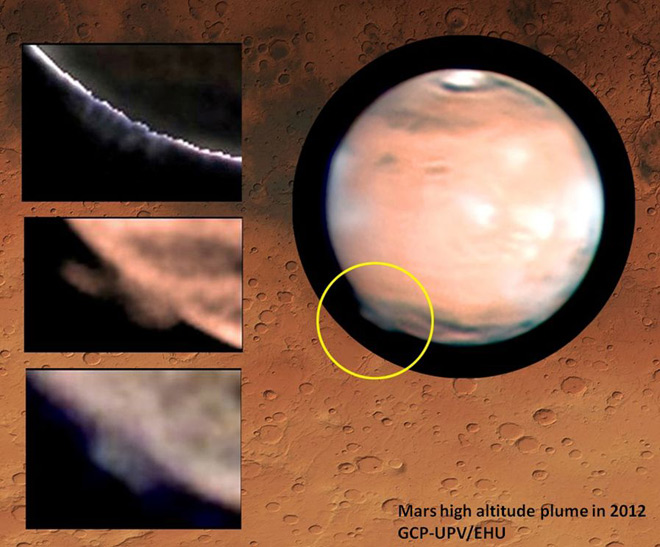 Scientists team of the ESA mission “Mars Express (Mars Express) unravel the mystery of the unusual clouds on Mars. This cloud appeared in 2012, at an altitude of 250 km above the planet. The plume stretched for a distance of 500 thousand square kilometers. It was formed 10 hours and lasted 10 days.

This atmospheric phenomenon was observed much higher region, where from carbon dioxide and water to form clouds. Experts have found that the plume was located in the ionosphere of the planet, where its gas shell  and charged particles from the Sun interact. However, his appearanceoccurred at the time of coronary mass ejection from the sun is changed space weather, increasing the rate of leakage of plasma from the atmosphere of the red planet. Thus was formed the unusual plume that was observed scientists mission “Mars Express”. According to an employee of the Swedish Institute space physics David Andrews, the release was powerful and affected on the planet’s atmosphere, but similar phenomena for Mars rare.
Help

“Mars-Express” — is the automatic interplanetary station of ESA. It also was part of the lander with automatic Martian station “Beagle-2”. The launch occurred on 2 June 2003 from Baikonur “Baikonur” with the help of the carrier rocket “Soyuz-FG”. 25 Dec 2003 “Beagle 2” landed on the planet, but the machine is not got in contact and was discovered on January 16, 2015 at the HiRISE camera orbiting NASA spacecraft Mars Reconnaissance Orbiter.

With “Mars Express” was able to take measurements of the structure the atmosphere of Mars, and build distribution maps of ozone and water vapor. Were open clouds from the dry ice affect climate and aerosol particles which fill the atmosphere up to a height of about 100 km, and found the night glow of nitrogen monoxide, known previously only on Venus. Was conducted mineralogical mapping the planet from where scientists drew conclusions about the absence of carbonates, and, consequently, insufficient stock of carbon dioxide for convert the climate. The station recorded the methane in the atmosphere that is evidence of either microorganisms or geological activity.

In 2010-2011 the “Mars-Express” investigated the Phobos (moon of Mars), by measuring gravity and making pictures of the back side of the satellite, which has not been previously captured.