October 14, 2014 on the Sun there was a coronal discharge. A significant mass of matter was ejected from the solar corona with an initial velocity of more than 1000 km / s. This ejection was not directed toward the Earth. But by a very good coincidence, ten NASA and ESA spacecraft were at once on his way, starting from the Venus Express in orbit and ending with the legendary Voyager 2. This gave a unique opportunity to study the spread of the outburst of the solar system.

All space stations fixed a similar sequence of ejection effects-the onset of disturbance, the intensification of magnetic fields, and the increase in the speed of the solar wind. Apparatus that had instruments for studying the radiation situation (Curiosity, Mars Odyssey, Rosetta and Cassini) also observed a temporary decrease in the level of cosmic rays. This is due to the fact that the ejection played the role of a kind of protective bubble, deflecting high-energy particles. 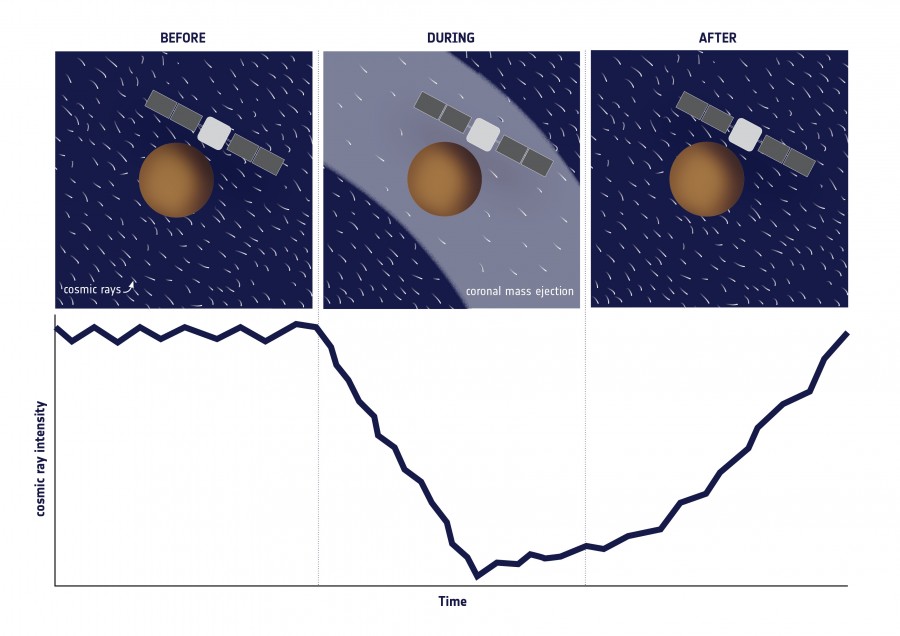 On October 16, the outflow reached Venus. The very next day it was fixed on the Martian orbit apparatus Mars Express, MAVEN, Mars Odyssey and the rover Curiosity. At that time, they were just preparing to study the effect on the atmosphere of the red planet of the comet C / 2013 A1 Siding Spring. By the time of the passage of Mars, the ejection velocity has decreased to 647 km / s. The data collected by the apparatus showed that the emission led to a 20% decrease in the level of cosmic rays in the vicinity of the planet. The effect was observed for 35 hours.

On October 22, the outburst was recorded by the “Rosetta” apparatus studied by Comrade 67 / P Churyumov-Gerasimenko. Its speed was 550 km / s, it caused a 17% decrease in the level of cosmic rays, lasting 60 hours. 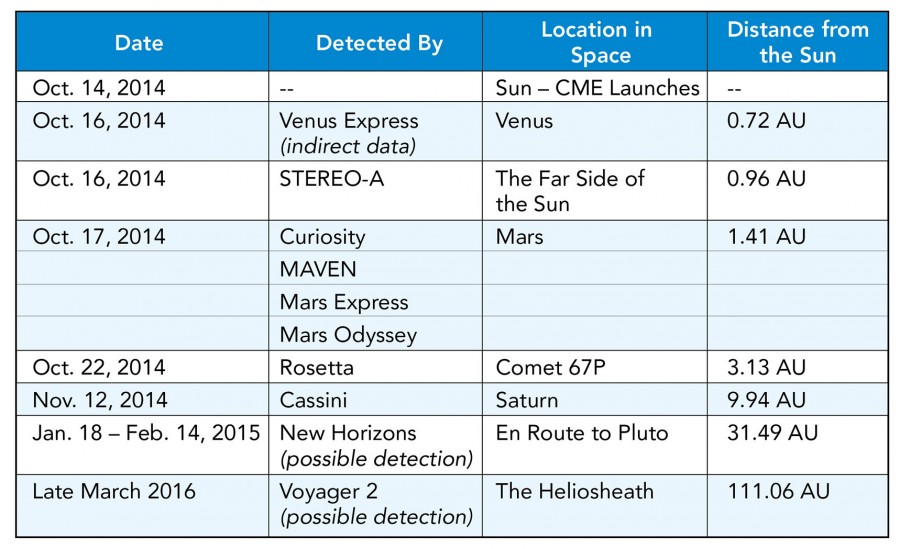 By mid-January 2015, the release reached the device “New Horizons” that was on the approach to Pluto. By this moment, its speed has decreased to 450 km / s. And finally, in March 2016, devices approaching the boundary of the heliosphere “Voyager 2” recorded environmental disturbances, apparently caused by the release. At that time, the space veteran was about 16.5 billion kilometers from the Sun. Thus, the coronal emission took almost a year and a half to reach the border region of the heliosphere.