Scientists have uncovered the mysteries of the butterfly galaxy 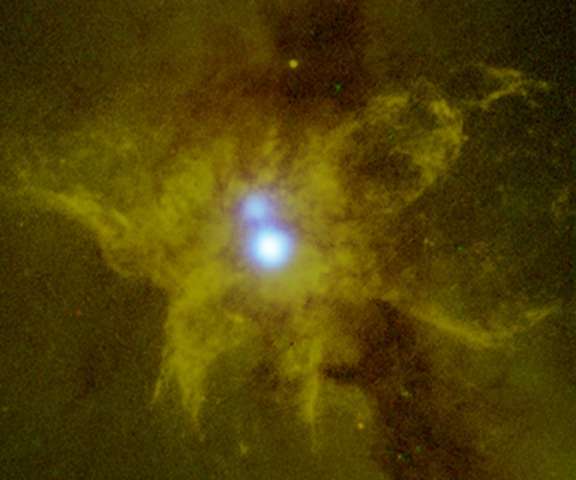 Galaxy NGC 6240, located in the constellation Ophiuchus, contains in its center two supermassive black holes that are about to collide. Experts suggest that this double heart is the cause of the unusual appearance of the galaxy. Unlike the Milky Way, which forms a relatively neat disk, the gas jets emitted from NGC 6240 extend over 30,000 light years and make it look like a floating butterfly in space.

“Galaxies with one supermassive black hole never had such a phenomenal structure,” said Francisco Muller-Sanchez, head of research at the University of Colorado in Boulder.

The team found that the gases ejected by black holes, combined with the gases thrown out by the stars, stop the formation of new stars in the galaxy NGC 6240. The same “winds” contributed to the creation of a massive gas cloud in the form of a butterfly.

“This is the first galaxy in which we can simultaneously observe the wind from two supermassive black holes and flows of weakly ionized gas from star formation,” Muller-Sanchez said.

In addition, it was found that two different forces participated in the formation of the nebula. For example, the northwestern corner of a butterfly is a product of stellar winds, or gases that stars emit through various processes. At the same time, the northeast corner is formed by a gas ejected by a pair of black holes that absorb a large amount of galactic dust and gas during fusion.

The mass of gases annually carried away by these winds from the galaxy is approximately 100 times the mass of our Sun. According to the author, this is a very large number, comparable with the speed with which the galaxy creates new stars.

Such outflows can have significant consequences for the galaxy itself. As scientists explained, during the merger of two galaxies, active star formation begins in them. However, a black hole and stellar winds can slow down this process, literally blowing off the gases from which new stars are born, like a bunch of leaves in the garden.

“NGC 6240 is in a unique phase of its evolution. Now it is intensively forming stars and needs a double wind blow in order to slow down this process and turn into a less active galaxy, “said co-author Julia Comerford.