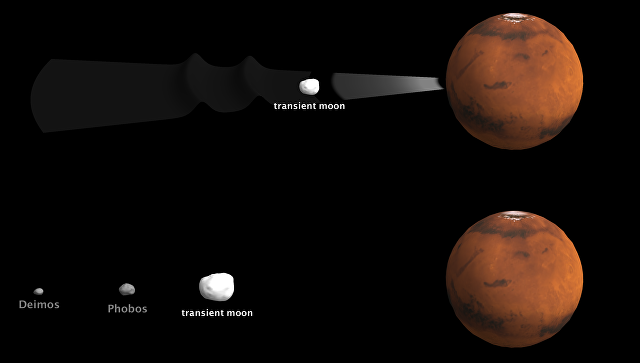 Mars could have three moons in the past, they emerged as a result of collision of a small proto-planet with the “germ” of the red planet, and the largest of the moons of births was down on the surface of Mars.

Today revolves around Mars two small satellites of irregular shape – Phobos and Deimos with a diameter of 22 and 12 kilometres distant from the surface of the red planet just 10 and 23 thousand kilometers. Today, many scientists believe that both moons are not planets and asteroids captured by the gravity of Mars in the distant past.

Interestingly, Phobos moving closer to Mars and will be destroyed and turned into a giant dust ring after 20-40 million years, Deimos, conversely, is removed from him and in the distant future he will “run away” from the red planet. Now scientists are struggling to explain why this is happening and how Deimos and Phobos could be on their current orbits.

The unusual nature of the motion of Deimos and Phobos, how to tell Pascal Rosenblatt (Rosenblatt Pascal) of the Royal Observatory of Belgium and colleagues, has led scientists to doubt that Phobos and Deimos are asteroids, and induced them to seek alternative explanations for the existence of these moons of Mars.

Rosenblatt and his colleagues suggested that the moons of Mars appeared approximately in the same way as our Moon – as a result of a cosmic accident, collision “germ” of the Earth and theis, the progenitor of the moon. They investigated whether it could actually be using a computer model of a newborn baby Mars, which they pushed with planetary embryos with different masses, compositions, and sizes.

As shown by their calculations, this could really happen, but in this case, it was born not one, but three moons of Mars, one of which ended very tragically. This satellite of the red planet, according to calculations of the European planetary scientists has arisen in the collision of Bud Mars and the proto-planet with a diameter of 2 thousand kilometers.

As a result of a collision in space was thrown 100 million gigatons of rocks (10 to 20 kilograms), about 2% which “Kailas” the as-yet unnamed moon to revolve at a sufficiently close distance from Mars, and other breeds merged into a miniature likeness of the protoplanetary disk, which was born of the Earth and other planets. After this accident may be the North polar basin on Mars, which many scientists believe the giant impact crater, and not just the bottom of a dried up Martian ocean.

The birth of the first moon of Mars in a special way influenced the behavior of this disc – there were two areas of increased density, which eventually turned into Phobos and Deimos, whose formation would not have been possible without the “protection” of her. Thus, this companion of the red planet served as a kind of “midwife” to two contemporary satellites of Mars.

She lived a very short life – in accordance with calculations Rosenblatt, she fell back on Mars 5 million years the field of his birth, with the result that the orbit left the two unusual moons, one of which is moving closer to Mars and the other is removed from it.

To test this theory simply – it is enough to compare the proportion of isotopes of different substances in the rocks of Phobos, Deimos and Mars. According to scientists, if their idea of fair, then breed the moons of Mars will be half composed of matter of their progenitor, colliding with the red planet, and half of the rocks of Mars.

Such testing will be possible in the next decade, when Phobos will be sent to the Russian Fobos-Grunt-2″, and after the Japanese mission MMX, the purpose of which is to collect samples of rocks from the moons of Mars and shipping them to Earth in 2020.