Scientists have uncovered the secret of the birth of the moon 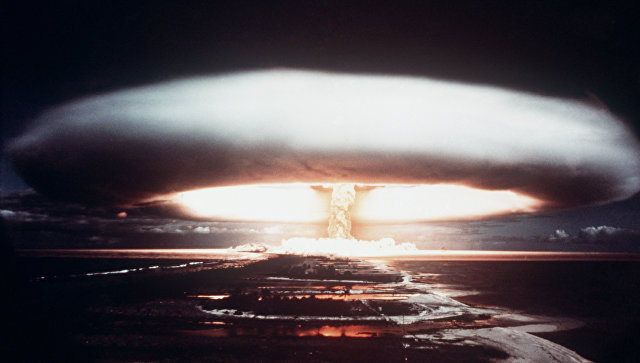 Traces of rare isotopes of zinc remaining on the site of the explosion of the first nuclear bomb, helped scientists prove that matter is the moon really was vaporized in the collision of the Earth and its progenitor and ejected into space.

“We found that evaporation of rocks at high temperatures such as those experienced during the formation of the planets, leads to a decrease in the proportion of light elements and increase the proportion of heavy isotopes in the remains of the “planetary materials”. We have long suspected this, but now we have experimental proof of this hypothesis,” said James day (James Day) of the University of California San Diego (USA).

The last 30 years, it was assumed that the Moon formed as a result of collision theis, protoplanetary body, with the “germ” of the Earth. The impact resulted in the ejection of matter theis and proto-Earth to space, from this material formed the Moon. Theory of collision of proto-Earth with a large celestial body explains well the mass of the moon, the low iron content therein, and other parameters.

However, this clash is a significant part of the material constituting the moon was supposed to bring hypothetical Theia. In its composition it had to be different from the Earth, as different from her most celestial bodies in the inner Solar system, including terrestrial planets and asteroids. But in fact, the composition of the Earth and moon are very similar, down to the same proportion of isotopes of many heavy metals and other elements.

This similarity is today planetary scientists explain the fact that Theia and Earth collided so hard during a powerful head-on collision that the Moon arose not from its matter, and thrown into space of the earth’s species or of a mixture of subsoil progenitor of the moon and our planet. As scientists believe, then the “cosmic accident” most of the matter of the future of the moon vanished and was in orbit in this form for quite a long time, evidence that, to date, has not been found.

Dey and his colleagues found the first evidence in favor of this theory, studying one of the epochal events of our age on Earth – Trinity, the explosion of the world’s first nuclear bomb at the site Alamogordo in July 1945.

During this explosion, the capacity of which was 20 kilotons, in the midst of it and in the immediate vicinity was dominated by temperatures approaching 1.3 thousand degrees Celsius and pressure above atmospheric in two thousand times, which roughly corresponds to the formation conditions of the moon. Caked breed that emerged on the site of the explosion, the so-called “tritonic”, a well studied and documented by geologists and physicists that made this nuclear explosion of the real “simulation” of the process of birth of planets.

How to tell the scientists, they were primarily interested in how changing behaviour of heavy and light atoms contained in the rocks, with their evaporation and volatilization into space after the collision of the Earth and theis. To answer this question, geologists have compared the content of various isotopes in the pieces of trinitite, formed in the explosion epicenter and 100-250 metres from him. 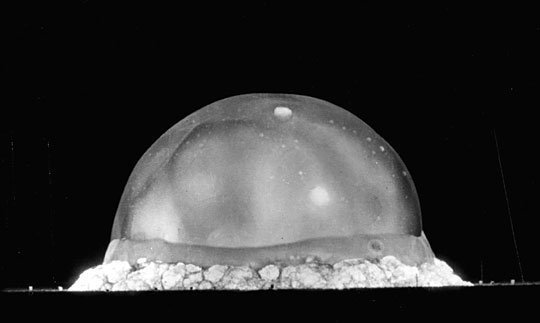 The plasma “bubble” Trinity using 0.025 seconds after the start of a nuclear explosion

By measuring the proportion of the isotopes of zinc, a relatively light metal, scientists have found what he was looking for – the amount of zinc when approaching the epicenter of the “Trinity” in the “nuclear glass” gradually decreased, while the proportion of heavy isotopes of this metal in it increased. Such a strange distribution of isotopes emerged for the reason that lighter isotopes of zinc evaporated faster leaving the Sands of the polygon, of which originated trainit, and then “flew” from the epicenter.

The similar chemical composition, as scholars have noted, is characteristic of lunar soil samples delivered to the Earth expeditions program “Apollo” – the common shares of a number of light metals, like zinc, are below, and the heavy isotopes in them than in terrestrial rocks.

Accordingly, it is safe to say that the moon rocks were indeed vaporized in the collision of its progenitor with the moon, which confirms that the prevailing theory of its formation.

“We were able to use this devastating historical event in the history of forever changed the course of civilization, for the benefit of science and to a new and very important information about what happened in the distant past,” concludes day.