Scientists: intelligent life will be found not earlier than 1500 years 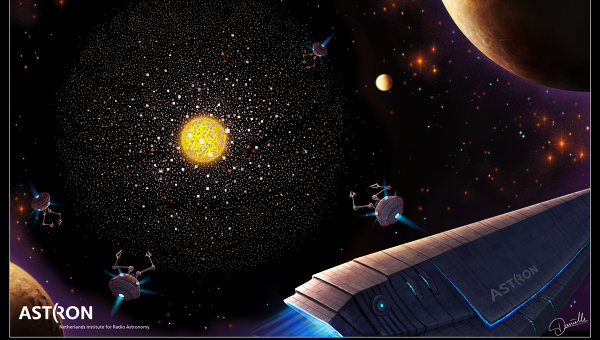 The absence of signals from aliens, and visible traces of their lives in the ambient space seems to indicate that intelligent life lives at a distance of at least fifteen thousand light-years from Earth and is found not before that time, said astronomers at the annual meeting of the American astronomical society.

“We still have not met or didn’t know about the aliens, for the reason that space is huge. It is possible that we never will hear anything, but after fifteen hundred years, most likely, such contact will be established, if any. We do not claim that we have or will contact them, or that the absence of contact will speak about the loneliness of humanity in the Universe. We just say that we hardly know anything about extraterrestrial intelligence,” said Evan Solomonides (Evan Solomonides) from Cornell University in Ithaca (USA).

Where did the aliens

More than half a century ago, the American astronomer Frank Drake developed a formula for calculating the number of civilizations in the galaxy with whom contact is possible, trying to estimate the chances of detection of extraterrestrial intelligence and life.

Physicist Enrico Fermi in response to a high estimate of the chances of interplanetary contact the Drake equation was formulated the thesis, which is now known as the Fermi paradox: if extraterrestrial civilizations so much, then why the mankind does not observe any traces of them?

This paradox, scientists have tried to solve in many ways, the most popular of which is the hypothesis of a unique Land”, says that for the origin of life and the emergence of intelligent beings unique requirements that essentially mirrored the vicissitudes of the evolution of our planet. The confluence of millions of unlikely circumstances, which we do not see aliens, says author Peter ward.

Solomonides and his colleague Yervant terzijan (Yervant Terzian) offer an alternative explanation to the Fermi paradox, calculate how many planets outside the Solar system could reach the signals produced by the human civilization.

How to tell the scientists the humanity out into space before Yuri Gagarin’s flight and sending the first satellites, the advent of television and radio, whose waves broadcast by a radio tower of the world not only across the Earth, but in space. Potentially the first such stream, according to astronomers, is the speech of Adolf Hitler at the Berlin Olympics in 1936. If aliens find us, his voice will be the first one they hear.

The scope of interstellar communication

Because electromagnetic radiation travels at the speed of light, we can say that signals from the Earth were to reach the planet in a sphere with a diameter of 160 light years, whose center is located on our planet.

Solomonides and terzijan tried to calculate how many worlds in this area, and what proportion of them could be habitable. In these calculations, scientists relied on the so-called principle of mediocrity – the antithesis of the hypothesis of a unique Land”, saying that conditions on our planet are quite ordinary and should occur everywhere in our Galaxy.

As shown by these calculations, in this “zone of communication” is an extremely small number of stars — less than a thousandth of a percent of their total number in the Galaxy (about nine thousand stars, much less planets – about three thousand analogs of the Earth, and very few habitable planets. Their number, according to the authors, is clearly insufficient in order to obtain any accurate estimates on the number of civilizations in the milky Way and to explain the Fermi paradox.

First a realistic assessment, and the ability to communicate with the aliens, according to Solomonides and terzijan, will appear to mankind only through fifteen hundred years, when the “communications” will cover at least approximately half of the stars in the Galaxy. In this case, humanity or will establish contact with extraterrestrial intelligence or a good reason to believe that it is actually there.

It should be noted that the forecast of authors of the article is very optimistic – their calculations are based on the assumption that all life in the Universe ultimately will become reasonable and will not disappear until the acquisition of intelligence as a result of extinctions and catastrophes. It is possible that the number of civilizations will be much lower and the time to contact with them — much longer than suggested by Solomonides and terzijan.