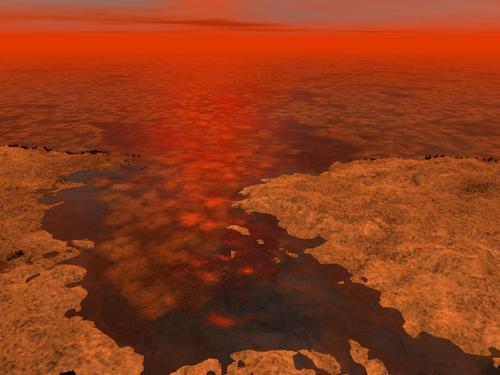 At the north pole of Saturn’s largest natural satellite, Titan, there are the largest lakes and seas that contain liquid gases instead of the usual liquid water, as on the surface of the Earth. At the moment, Titan attracts scientists’ attention by being a unique celestial body with a proven fluid on its surface. Apart from the Earth and Titan, no other liquid was found anywhere else. This refers to the lack of evidence base for the presence of fluid on other celestial bodies of our Solar System.

The temperature on the surface of Titan is about -170-180 degrees. There can be no liquid water here, but liquid gases are quite stable in the local seas and lakes.

Recent studies of Titan, as well as computer modeling of its surface, seas and lakes, show that they can sometimes be covered with hissing nitrogen bubbles.

“By studying the solubility of nitrogen, we are now confident that such nitrogen bubbles could actually form in the seas of Titan, and there can be a lot of them. This is another mystery of the giant Titan “- Jason Hofgartner of the Jet Propulsion Laboratory, who led the study.