Scientists proposed a new version of the origin of the moon 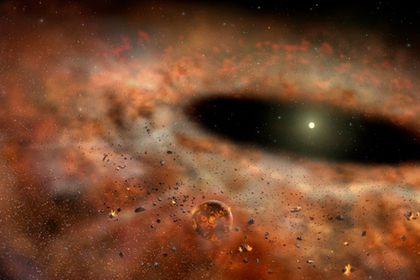 Scientists of California and Harvard universities proposed a new version of the formation of the Moon in return. According to the results of theoretical modeling, the Earth’s satellite was formed inside the synessia – a cloud of gas and molten rock, resembling a donut or red blood cell. The article of astronomers is published in the Journal of Geophysical Research: Planets. Briefly about the content of the work is described in a press release on EurekAlert !.

Sinestia as a new species of planetary bodies was proposed in 2017 by American physicists Simon Lock (Simon Lock) and Sarah Stewart (Sarah Stewart). Modeling has shown that these objects occur when the angular velocity of rotation at the equator exceeds the orbital velocity. This is possible when two fast-moving objects collide. Scientists believe that the Earth in the past was also a synasis when it was hit by a wandering planet the size of Mars.

Planets in the form of blue can exist for several hundred years, after which they begin to move into a spherical shape. However, other heavenly bodies may be formed within it.

Researchers believe that the Moon was formed from pieces of molten rock near the surface of the earth’s crust at a temperature of 2-3 thousand degrees Celsius. At the same time, the size of the donut gradually decreased, as a result of which the “embryo” of the Moon, surrounded by its own cloud of molten rock, gradually came out of the blue. This model explains the slight difference in the chemical composition of the rocks of the Earth and its satellite by the fact that the latter lost volatile elements that evaporated easily due to high temperatures.

In December 2017, astronomers of the Paris Institute of Geophysics showed that the popular hypothesis about the origin of the Moon, according to which the latter was formed as a result of a collision of the Earth with the planet Teyeya the size of Mars, can not explain the mineral composition of the satellite. The computer model showed that the planet-wanderer had to be much smaller.