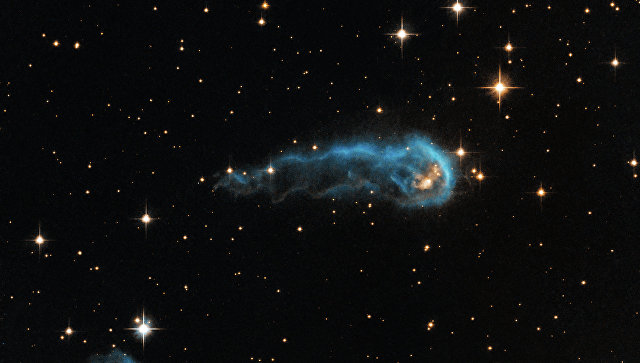 The mysterious “alien star” KIC 8462852 in the constellation Cygnus is hardly surrounded by the so-called Dyson sphere – a man-made megastructure that can absorb the energy of the star and make it “blink,” the article published in the Astrophysical Journal Letters says.

“Most likely, the fading and brightening of this star is due to the presence of clouds of dust in its orbit.The new data that we collected show that this dust blocks different amounts of light at different wavelengths, and for this reason we can say with certainty that this matter is not opaque, like a planet or, for example, a megastructure of aliens, “says Tabetha Boyajian of Yale University (USA).

In mid-October 2015 and Boyyadzhian, her colleagues described unusual fluctuations in the brightness of the star KIC 8462852 in the constellation Cygnus, which may indicate the presence in its vicinity of the so-called Dyson sphere created by a super-developed civilization of aliens.

Initially, scientists assumed that such a “blinking” of the star could be caused by a swarm of comets that closed its light from observers on Earth, but in January 2016 the American astronomer Bradley Schaefer discovered that the brightness of KIC 8462852 inexplicably fell by 0.16 magnitude in the last century, which cast doubt on this theory.

Initially, a number of skeptics tried to deny the very fact of the tarnishing of KIC 8462852 in the short and long term, but later scientists working with the Kepler telescope, as well as Russian astronomers from the Pulkovo Observatory, confirmed that the brightness of this star was falling in the past.

According to Boydjian, the first tarnishing of the “alien star” was actually discovered by chance, and therefore the astronomers were not ready to observe them and disclose the reasons for what caused the KIC 8462852 to sharply reduce the brightness. In May of this year, thanks to a specially organized campaign for this at Kickstarter and the assistance of scientists from all the world’s leading land and space observatories, Boyadjian and her colleagues comprehensively studied the four new tarnishes of the “Tabbi star”.

One of the goals of these observations, as pointed out by Boyyagian at the end of May this year, was to assess how “opaque” is the object that prevents the light of KIC 8462852 from reaching Earth. To conduct such measurements is elementary simply – it is enough to compare the brightness of a light at different wavelengths that do not go beyond the optical part of the spectrum.

If the object is opaque and consists of a solid piece of solid matter, then it will equally strongly reduce the brightness of the “Tabbi star” at all wavelengths. If it consists of small particles of dust or cosmic “pebbles,” some of the rays would pass through their clouds better than others.

As it turned out, the second scenario was much closer to the truth than the first one. This sharply narrows the number of possible applicants for the role of the “culprit” of all the blinking of the star, and makes the existence of the Dyson sphere in orbit KIC 8462852 impossible.

Now scientists continue to observe the “Taby star” with the help of an optical telescope at the Las Cumbres Observatory in California. The new tarnishing of this mysterious luminary, as Boyandjian and her team hope, will help to understand how these clouds of dust arose and where they are.