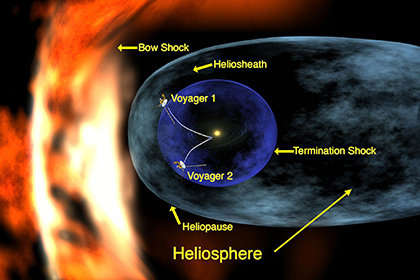 Researchers of NASA found out that the structure of border of Solar system or “a bubble of star wind” can change. Point the data obtained by the Voyager-1 and Voyager-2 space probes to it.

“Bubble of star wind” (heliosphere) call area in which the particles which are let out by the Sun fly concerning it with a supersonic speed. The heliosphere is limited to a shockwave which arises because of collision of a solar wind with the interstellar environment. The border of “bubble” is considered border of Solar system, and in 2012 “Voyager-1” became the first simulated object which crossed it.

Before leaving Solar system, the device collected data on a geliosferny cloak — the intermediate zone between border of a heliosphere and border of a shockwave where there is a speed drop of a solar wind to sound values. The probe recorded body height of the high-energy particles called by ultrarays. However “Voyager-2” which still is now in a geliosferny cloak in “bubble” did not reveal any changes.

Scientists consider that this phenomenon is explained by the fact that the Sun is in the fissile phase of the cycle. It, in turn, strengthens a solar wind which interferes with penetration of ultrarays into a heliosphere. Thus, “the bubble of star wind” is dynamic structure which can be as a barrier to high-energy particles, and to pass them inside.