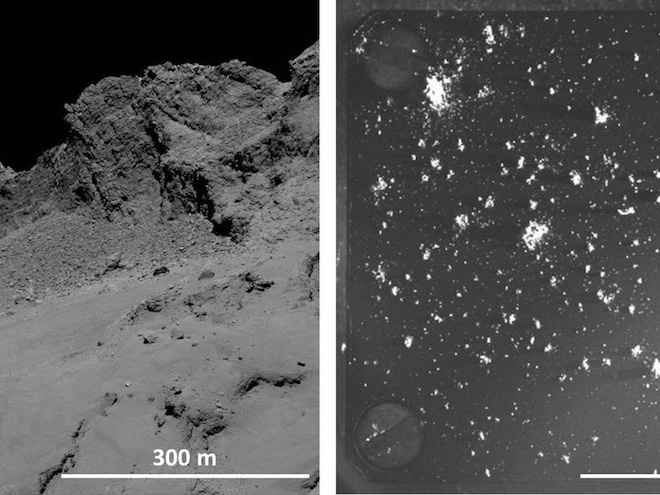 The dust emitted into space by the comet 67P / Churyumov-Gerasimenko almost half consists of organic molecules. It refers to the most ancient and carbon-rich material in the solar system, known to scientists today. Since the inception of the solar system, the composition of the comet’s dust has not changed much.

Such results have recently been published in the journal of the Royal Astronomical Society Monthly Team of the Royal Astronomical Society team of the scientific program COSIMA. COSIMA is a special device installed on board the space shuttle Rosetta, which investigated the comet Churyumov-Gerasimenko from August 2014 to September 2016. As part of the current study, scientists conducted a detailed analysis of the chemical composition of cometary dust, according to the portal Phys.org.

When a comet, moving in its elliptical orbit, approaches the Sun, it becomes active: frozen gases evaporate, taking with them to space tiny particles of dust. Capturing with the help of “Rosetta” and exploring these particles, scientists were able to calculate the “building materials” of the comet itself.

Throughout the work of the “Rosetta” team mission COSIMA managed to collect more than 35 thousand samples of comet dust. The smallest particle was only 0.01 millimeter in diameter, the largest specimen reached one millimeter.

The instrument COSIMA allowed first to observe individual dust particles with a microscope, and then – to irradiate them with a high-energy beam of indium ions. The secondary ions emitted during this process were then “weighed” and analyzed using a COSIMA mass spectrometer. In the current analysis, the researchers confined themselves to 30 samples of different sizes, selected at different stages of the Rosetta mission.

According to the chief researcher of the COSIMA team, Dr. Martin Hilchenbach, recent analyzes show that the composition of all the particles studied is very similar. Scientists tend to believe that the dust of a comet consists of the same “ingredients” as its core. The fraction of organic molecules accounts for about 45 percent of the weight of solid cometary material.

“Thus, the comet Rosetta belongs to the carbon-rich bodies in the solar system that we know,” stresses Dr. Oliver Stenzel, a member of the COSIMA team.

The remaining 55 percent fall on mineral substances, mainly silicic acid salts. Scientists were struck by the fact that among them prevailing are non-hydrated minerals, i.e., missing water compounds.

“Of course, Comet Rosetta contains water, like any other comet. But since the comets spent most of the time on the ice edge of the solar system, it almost always remained frozen and could not react with minerals, “explains Martin Hilchenbach. That is why the researchers believe that the absence of hydrated minerals in the dust of comet Churyumov – Gerasimenko indicates that it consists of a very ancient material.

In support of this conclusion, the ratio of some elements, such as the ratio of carbon to silicon, also speaks. Its value (above 5) is very close to the value of the Sun, that is, the ratio characteristic for the early stages of the development of the solar system.

The scientists’ conclusions also concern our ideas about how life appeared on the Earth. In previous publications, the COSIMA team has suggested that the carbon found in the comet Churyumov-Gerasimenko is basically large organic macromolecules. It has now become apparent that these compounds constitute a significant part of the cometary material. Thus, if comets really were the “suppliers” of organic matter to the Earth in the early stages of the development of the solar system, then most likely the material was mainly supplied in the form of such macromolecules.