Scientists saw the birth of a black hole 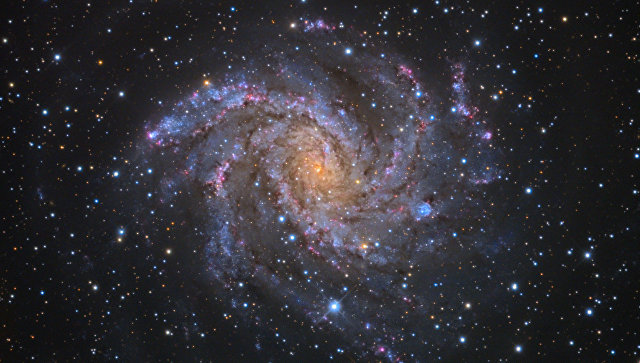 Pictures from Hubble have helped astronomers for the first time to see what a big star N6946-BH1 in the constellation of Cygnus directly into a regular black hole, leaving only the warmth of his life.

A black hole is a special area in space and time where gravity is so great that they cannot overcome even the objects moving at the speed of light, including light itself.

Ordinary black holes, unlike their supermassive cousins at the centres of distant galaxies, it is extremely difficult to find and study because of their calm disposition. Their presence we can only know by how they bend light from other stars and flashes of radio emission produced by the absorption of their clumps of matter.

Jill Gerke (Gerke, Jill) Ohio state University (USA) and her colleagues revealed the first hints about where these mysterious objects, and observing distant galaxies in search of the so-called failed supernovae with the Large binocular telescope Observatory, mount Graham.

The fact that the observations of the last two decades show that all detected during this time, the supernova resulted from the explosion of stars whose mass does not exceed the sun in more than 20 times, or was higher than that of the Sun, no less than 40 times. Between them, in fact, a gaping hole, which, according to some astrophysicists, fill the black holes that are born extremely unusual way.

Scientists assume that these is the following – when a luminary dies, his matter is dramatically shrinks to the size of an atom under the action of gravity. At this time, inside him, through the strengthening of thermonuclear reactions and growth temperatures, there is a shock wave, which moves from the center toward the edges of the dying star.

In the case of a normal supernova, this wave has sufficient force to stop the compression and reverse it, which leads to the most powerful thermonuclear explosion and scattering of external covers of a star, on the ground that there is a neutron star and a giant cloud of hot gas, pulsara or planetary nebula.

If the mass of the dying star is in between 20-25 Suns, then the strength of this wave is not enough to stop the compression, it starts to stall and the inevitable supernova is canceled – instead, the star directly and fully transformed into a black hole and actually disappears from the sky.

The first traces of this interesting process Gercke and her colleagues found in the galaxy NGC 6946 at 22 million light-years from Earth, is known for his rough temper and a record high number of supernovae, because of what scientists call it galaxy-fireworks.

One of the largest red giants in this galaxy, star N6946-BH1 whose mass was 25 times higher than that of the Sun, the brightness of hundreds of thousands of times higher than the sun, simply disappeared on 20 October 2009 after a short and fairly weak flash, which began in March 2009.

To test this extraordinary open Gerke and her colleagues turned for help to the scientific team of the Hubble telescope, which helped them get pictures N6946-BH1 archive before she disappeared and gave them the opportunity to take snapshots of the missing stars in the coming months and years.

These photographs confirmed that the star has disappeared, and has allowed scientists for the first time to see the traces of the process of the birth of a black hole, invisible in the region of visible radiation, but visible in the infrared part of the spectrum. They gradually died out since the formation of the black hole in the fall of 2009 to October of 2015, when scientists were able to see them one last time.

The source of this heat, as astrophysicists believe, were grains of dust ejected by the star in the last periods of its existence, when its outer shell was inflated and was partially discharged into the surrounding space. Now the black hole slowly eats the dust, pulling her to him and absorbing it, and thanks to the traces of the process recorded by the Hubble, we were able for the first time in history to see the newborn black hole.

This discovery, as recognized by Gerke, was a surprise to astronomers – they didn’t think I’d see the first failed supernovae so fast, and expected to find the first object in 7-9 years. Detection N6946-BH1, she said, suggests that ordinary black holes occur in the Universe more often than we used to think.