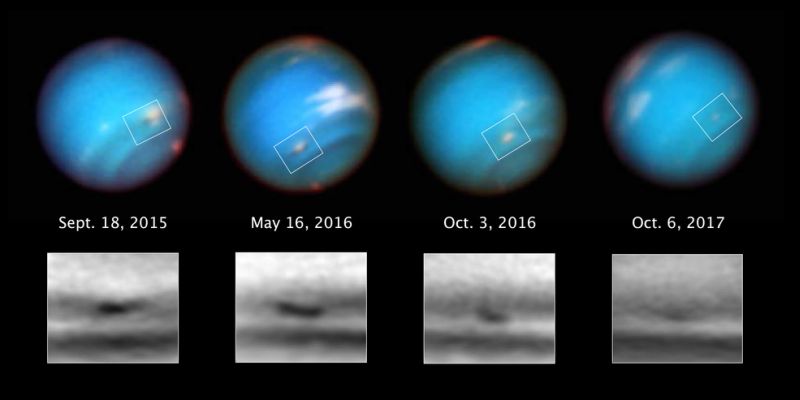 At a distance of almost 5 billion kilometers from us, on the farthest known planet in our solar system was seen an ominous and dark storm. Once it was so vast that it could stretch along the Atlantic Ocean from Boston to Portugal. Currently, this storm is shrinking, as was seen in Neptune photographs taken by the Hubble Space Telescope (NASA).

The giant dark storms on Neptune were originally discovered in the late 1980s by the American automatic interplanetary station Voyager 2. Since then, only the Hubble Observatory has been able to capture with amazing accuracy the elusive characteristics of these storms. Hubble discovered two dark storms that appeared in the mid-1990s, and then disappeared. The last storm was discovered in 2015, but now it is noticeably decreasing, somehow shrinking.

The dark point material can be hydrogen sulphide with the sharp smell of rotten eggs. Joshua Tollefson of the University of California at Berkeley explained that the particles themselves are still very reflexive. They are slightly darker than particles in the surrounding atmosphere.

Unlike the Great Red Spot on Jupiter, which has been visible for at least 200 years, the dark vortex of Neptune has existed for only a few years. And this is the first endangered storm that was photographed.