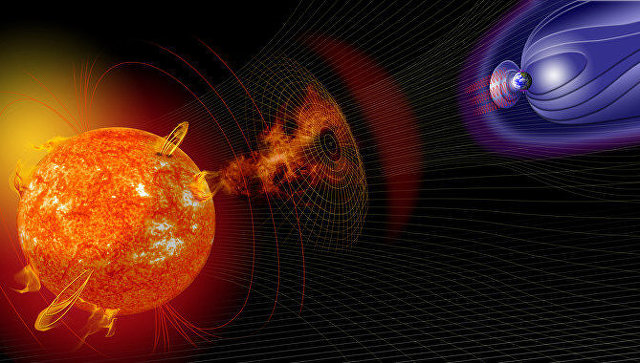 Magnetic storms, repeated every two weeks, will rage on the surface of the Earth, such a geomagnetic picture can last for several months.

“While the configuration of the solar wind does not fundamentally change, Earth will have to live in the rhythm of magnetic storms, repeating every two weeks,” the FIAN said.

According to the Institute’s staff, at present two dense streams of solar wind are observed in outer space, the sources of which are located on opposite sides of our star. The sun, when viewed from the Earth, turns around in about 27 days. The streams of the solar wind, whose sources are on the Sun and now rotate with it, “strike” the Earth alternately in two weeks’ intervals (half of the 27-day period), creating magnetic storms repeating with the same pitch.

“Such a stable pattern of recurring geomagnetic disturbances is typical for the Sun near the minimum of activity.In this period, the magnetic configuration is extremely simplified on the Sun and, since new magnetic regions and spots almost do not appear, the configuration of the solar wind flows becomes very stable, sometimes it does not change for several months It is not ruled out that this will be the case this time, “the report says.

It is noted that the nearest geomagnetic storms, which will last on the Earth from October 24 to 27, will not exceed two points on a five-point scale (that is, they will be of medium strength). Such storms occur up to 60 per year. The next storm, the beginning of which is expected on November 6-7, will be somewhat stronger due to the higher density of the corresponding wind flow.