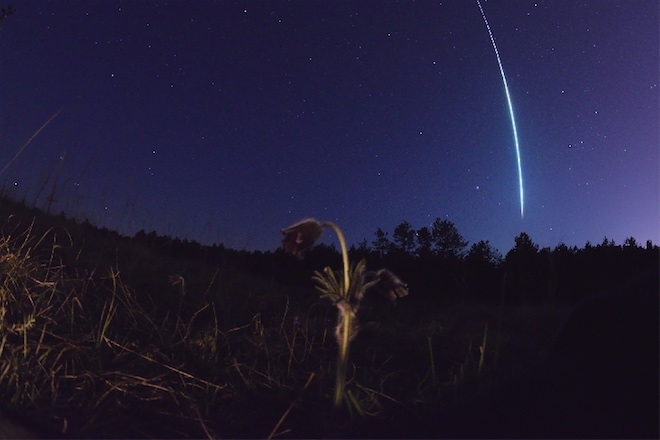 The inner region of the solar system is literally strewn with dusty rocky debris from decaying comets and destroyed asteroids. Every night the Earth passes through tons of such debris. If you keep watching all night, provided that the weather is clear, you can see a dozen fireballs crossing the firmament – they are called sporadic meteors.

On April 8, photographer Monica Landi-Gebnar was able to capture a fireball in the sky above the town of Veszprém in Hungary. As she told me, first she took pictures of the sunset, then waited for the ISS, and a little later, “Progress MS-07” flew overhead. The meteor illuminated the sky right in the gap between the appearance of these two spacecraft. In the picture you can also see a beautiful flower in the foreground – it’s an anemone (Pulsatilla nigricans), which, as originally planned by Landi-Gebnar, was supposed to decorate the frame with the ISS. She also noted that the stellar magnitude of the meteor was -10 (more than 100 times brighter than Venus).

Sporadic meteors appear 10-30% more often during the spring compared to other seasons – and no one knows why. According to Bill Cook of the Office of the Meteoroid Environment of NASA, this phenomenon has been known for more than 30 years. It’s not just about meteors – in the spring, meteorites also fall more often (meteoroids that flew to the surface of the planet). Perhaps there is a whole cluster of meteoroids scattered along the April-May arc of Earth’s orbit. If so, then its origin is unknown.