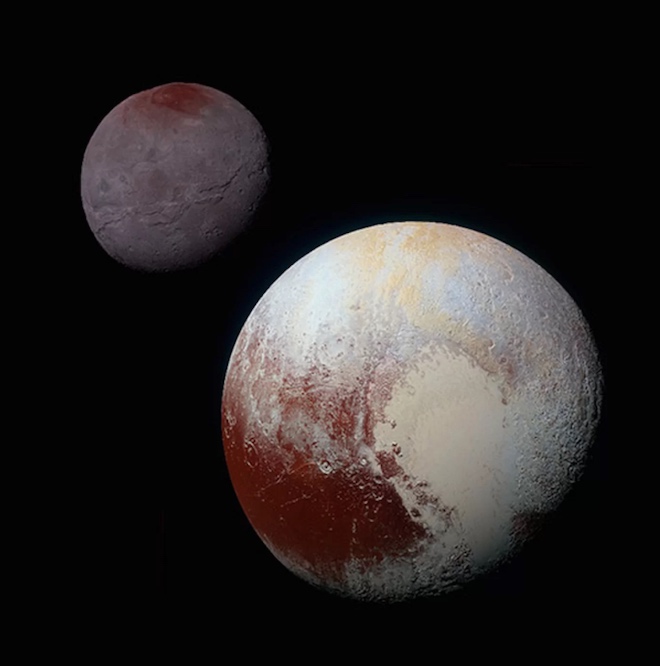 In 2015, scientists learned about the giant red “whale” on Pluto. A group of Japanese researchers believe that this dark region can be a mark of a giant impact. By the way, thanks to the same blow, a huge Plutonian moon Charon was formed, scientists are sure.

The surface of Pluto – the largest object of the Kuiper belt, a ring of ice bodies beyond the orbit of Neptune – remained a mystery for decades. In 2015, NASA’s New Horizons device photographed in high resolution complex elements of the landscape of Pluto during the approach in July 2015. Thanks to this mission, we know that Pluto has ice mountains, blue skies, a nitrogen glacier 1000 km wide in the shape of a heart, and possibly an underground ocean.

One of the most outstanding features of the landscape on Pluto is unofficially called the Cthulhu region or the “whale”. The region of Cthulhu is dotted with craters, which means that it is billions of years old – much more than the young crippled “heart” with which it borders. Scientists say that for the reddish shade of the region meet tolines, complex hydrocarbons.

To learn how the “whale” got its color, Yasuhito Sekine from Tokyo University (Japan), conducted experiments with heating of organic molecules (for example, formaldehyde) that were present in the emerging Pluto soon after the formation of the solar system. Sekine found that you can create the same dark reddish color by heating the solution above 50 degrees Celsius for several months.

Meanwhile, Hidenori Genda of the Tokyo Institute of Technology conducted computer simulations of a giant strike against Pluto. Genda found out that the impact that created the satellite Charon, which is only 2 times smaller than Pluto, could form a huge pool of hot water next to the equator of the celestial body. When the pool cooled down, reddish complex organic substances could form.

However, Kelsey Singer of the Southwest Research Institute in Colorado believes the theory is unlikely. It can not be, says Singer, that the “whale” has remained unchanged for 4 billion years.

Singer believes that the explanation of the coloration of the “whale” is a dark material from methane treated with radiation on the surface of Pluto or in its atmosphere.