SETI Institute found no traces of aliens on the “interstellar asteroid” 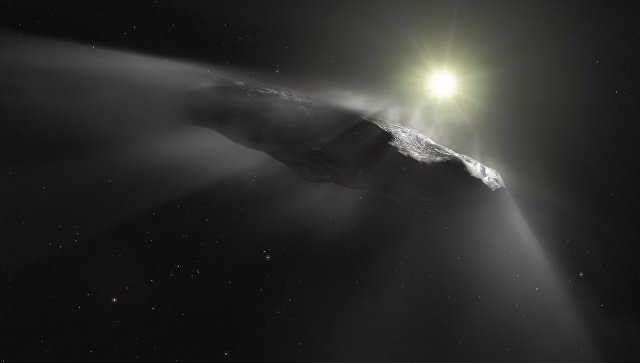 Long-term observations of the Oumuamua asteroid at the time of its approach to the Earth exclude the presence on its surface of “any artificial sources of radio waves or other signals.” This conclusion was made by astronomers from the SETI Institute for Extraterrestrial Civilizations, who published an article in the journal Acta Astronautica.

“We tried at least some signal that indicated the man-made character of this object. We didn’t find anything like that, despite the very high sensitivity of our telescopes. On the other hand, it’s impossible to say for sure that our observations completely exclude the fact that Oumuamua created the aliens, “says Gerry Harp from the SETI extraterrestrial civilization search institute in Mountain View (USA).

In the middle of October last year, the Pan-STARRS1 automated telescope discovered the first “interstellar” celestial body. This object was tentatively called a comet, received the temporary name C / 2017 U1, and dozens of ground-based and orbital telescopes began to follow it.

Before it left the near-Earth space, scientists managed to get a lot of pictures and data on its physical properties, which indicated that this object is more like an asteroid than a comet. It was renamed 1I / 2017 U1, and later received the name Oumuamua, which means “intelligence officer” in the language of the indigenous inhabitants of the Hawaiian Islands.

Subsequently, the unusual cigar-shaped form of Oumuamua and the presence of large quantities of organic matter on its surface once again forced scientists to rethink what it really was – the nucleus of an “extinct” comet, a real asteroid or something completely different.

For example, at the beginning of November, astronomers from Harvard suggested, basing on this fact and the fact that the trajectory of the “interstellar scout” movement changed in an unusual way when it approached the Sun, that it could be a man-made object.

According to them, Oumuamua is a kind of interstellar “sailboat”, launched by aliens in the direction of the solar system. His unusual form helped him not to stray from the course and reach the Earth in several million years of flight.

Harp and his colleagues checked whether this was the case using the data collected by the ATA radio telescope after Oumuamua reached the Earth as close as possible when this celestial body crossed the orbit of our planet in late November and early December 2017.

The short distance and high power of the ATA allowed astronomers to check whether there are even the smallest sources of radio waves on the surface of the interstellar “scout”, whose power is tens and hundreds of times inferior to cell phones and walkie-talkies.

The maximum power of the radio transmitter, which would remain invisible for this observatory, is only 500 milliwatts, which is clearly not enough to establish contact with the Earth or to communicate with other planetary systems.

All this, according to Kharp, suggests that Oumuamua can hardly be an “interstellar probe” created by aliens to establish contact with Earth. Nevertheless, observations of it and the subsequent interstellar objects will help us to understand how the worlds are arranged outside the solar system and how suitable they are for life.