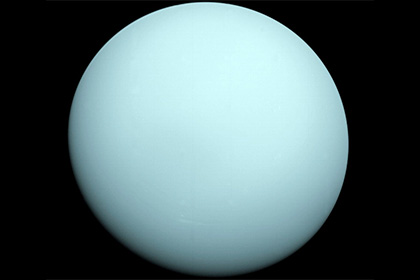 The American scientists from Idaho University in Moskou have allowed existence at α and β rings of Uranium of several минилун — small satellites of the planet. The pre-print of a research is available on the website arXiv.org.

Miniluna have to have two-seven kilometers a diameter. Most likely, they are located at distance about 100 kilometers from α and β Uranium rings. These celestial bodies as scientists believe, allow to keep structure of rings of the gas giant.

Scientists have come to the conclusions, having analysed the data obtained on interplanetary Voyager 2 stations. Authors note that the sizes минилун don’t allow to make out them in pictures from the device.

At the planet Uranium is 13 rings. On ring brightness α and β concede only to a ring ε. Most likely, the ring system around the gas giant has resulted from destruction of his satellite.

The Voyager 2 station has flown by by system of Uranium in January, 1986 at the minimum distance 81,5 thousand kilometers. During rapprochement the measurements and pictures made by the station have allowed to find new rings and for the first time at a short distance to receive images of satellites of the planet.