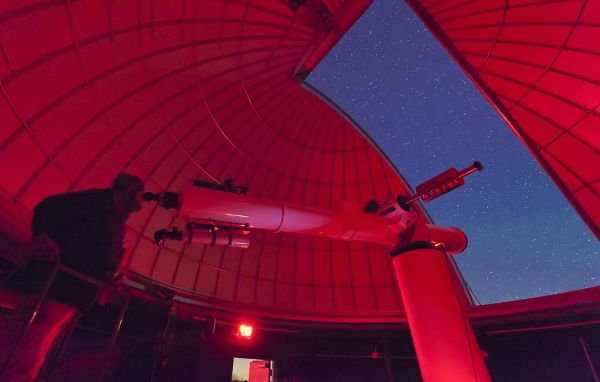 In the constellation Leo, astrophysicists have found an unusually dense cluster of six ancient galaxies, which were captured by the gravity of a giant supermassive black hole in its central part. The discovery of these galaxies explains how such black holes reached such a huge mass in the early epochs of the universe, writes the press service of the European Southern Observatory (ESO). An article describing the discovery was published by the scientific journal Astronomy & Astrophysics.

“Our observations speak in favor of a theory that links the rapid growth of the largest and most distant supermassive black holes with the fact that they are located inside the densest and largest clusters of dark matter located at the central nodes of the” cosmic web. “In the past, we have not found such objects due to the lack of suitable tools for this “, – said one of the authors of the work, astrophysicist from Johns Hopkins University (USA) Colin Norman.

Scientists believe there is a supermassive black hole at the center of every galaxy that continually engulfs hot gas and dust. Part of this substance is ejected by the black hole’s attraction in the form of thin beams of gas that move at almost the speed of light. These structures, which astronomers call jets, emit massive amounts of X-ray, gamma and thermal radiation.

Scientists used to think that supermassive black holes form as a result of multiple mergers of stellar mass black holes. In recent years, space observatories have discovered dozens of giant black holes in the first galaxies of the Universe, which have gained several billion times the mass of the Sun in an impossibly short time, less than a billion years.

Therefore, astrophysicists assume that supermassive black holes were formed inside those regions of the Universe where the density of dark and visible matter was high enough to form the so-called black holes of intermediate mass, objects tens of thousands of times heavier than the Sun.

Scientists suggest that such clusters of matter are found in the central nodes of the so-called cosmic web – a three-dimensional network of threads of visible and dark matter, which arose in the first moments of the existence of the universe due to the propagation of the “echo” of the Big Bang.

Black hole and its galactic retinue

Norman and his colleagues obtained the first confirmation of this theory by studying the most distant and brightest quasars with the VLT optical telescope. Investigating such objects, scientists are trying to determine the density of matter in their vicinity, as well as to find potential satellites of such galaxies, which are almost invisible against their background.

The attention of astronomers was attracted by the quasar SDSS J1030 + 0524, located in the constellation Leo. Light travels from it to the Milky Way for 12.8 billion years. Thanks to such a large distance, we see it in the state in which it existed about 900 million years after the Big Bang.

Scientists discovered this object four years ago, and even then they found hints that the density of matter in its vicinity was unusually high compared to other parts of the early Universe. Norman and his colleagues found out the reason for this with the help of two new spectrographs that were recently connected to the VLT.

Data from these devices showed that around this quasar and its host galaxy there were six other objects – fairly large ancient galaxies. By measuring the distance to each of them, scientists confirmed that they were all gravitationally bound to SDSS J1030 + 0524 and were at a relatively short distance from the supermassive black hole – no more than 16 million light years.

Further calculations showed that the density of visible matter in this cluster of galaxies was on average one and a half to two times higher than in the surrounding regions of the early Universe. This speaks in favor of the fact that there are large clusters of dark matter. Their combined mass should be several trillion times greater than the sun’s.

The researchers suggest that due to such a concentration of matter in this area of ​​the Universe, comfortable conditions have been formed for the growth of supermassive black holes and black holes of intermediate mass. Subsequent observations of similar regions of space, Norman and his colleagues hope, will help scientists find additional support for this theory.