Today, the Earth has entered a stream of solar wind emanating from the southern coronal hole in the Sun’s atmosphere. Despite the fact that the magnetic storm reached average values ​​(Kr4), the Earth’s magnetic field failed and powerful auroras were observed.

A powerful purple glow was recorded in the sky over Alberta, Canada. 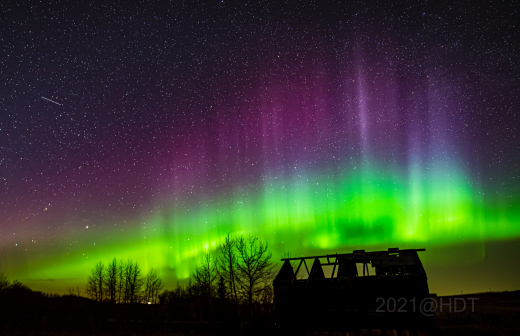 Harlan Thomas photographed a flash of auroras northwest of Calgary:

“They moved like a huge wave in the ocean, literally sweeping the horizon in less than 30 seconds. I have never seen purple pillars before, and they could be seen with the naked eye. ”

Purple auroras are a sign of nitrogen. Ionized nitrogen (N 2 +) molecules in the upper atmosphere are excited by falling particles of the solar wind, emitting a characteristic purple glow.