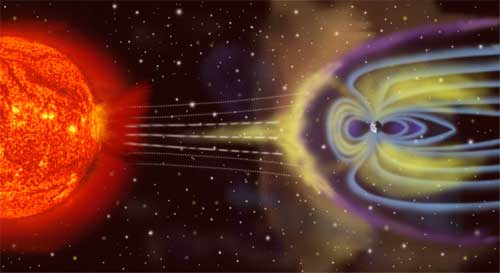 When the solar wind reaches the Earth, it becomes turbulent, gusty and unpredictable, capable of causing a spectacular light show and the disabling of satellites.

But it all begins quite differently. When the solar wind escapes from the solar corona, the upper atmosphere of the Sun, the flow of charged particles is divided into clear sunlight. However, the details of how particles are transferred from the beam to the wind, has eluded scientists since the discovery of the phenomenon in the 1950-ies.

Astronomers from space flight Center Goddard think that they have the answer. Using Observatory solar-terrestrial relations (STEREO), the researchers photographed as the solar wind comes from the Sun. Craig Deforest, the study’s lead author, describes the process as:

“As the distance from the sun, the strength of the magnetic field decreases faster than the pressure of the material. In the end, he starts to behave as a gas and not as a magnetic image of a structured plasma. In a press release, a spokesman for NASA compares the process with a shot from a water gun

“First, the water — smooth and uniform flow, but in the end breaks into droplets, then into small droplets, and as a result the small water dust”. Amazing pictures of scientists show the moment when the plasma breaks up into droplets. In 2018, NASA will launch a mission “solar Proub plus. The probe will try to fly up to the solar corona to get more data on the solar wind.