Space disasters that can destroy life on Earth 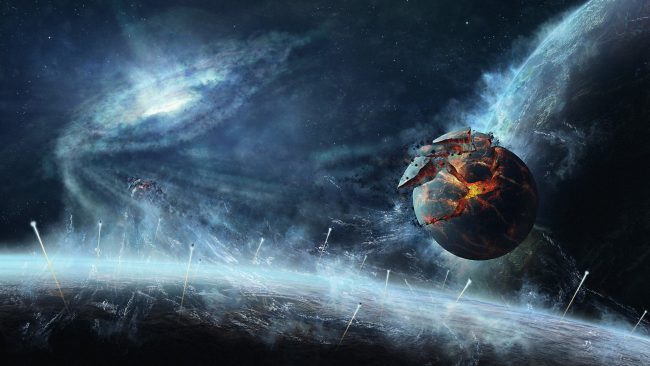 Life on our blue planet seems safe, until we know what hides in the depths of space.

Our sun is not so peaceful star, as it used to be. It creates powerful magnetic fields that form sunspots are impressive in size many times greater than the Earth. It can also spew a stream of particles and radiation — the solar wind. Restrained by the magnetic field of the Earth, that the wind produces beautiful polar lights. But when he becomes more powerful, it may interfere with radio communications or cause interruptions in the supply of electricity.

The most powerful magnetic solar storm on the Earth was in 1859. This incident in Carrington has caused great disturbance in a relatively small-scale electronic equipment. Such events could have happened in the past.

But we only in recent years have become completely dependent on electronic equipment. The truth is that we can be seriously affected if we underestimate the risk of a possible Carrington or even more powerful events. Although the solar flare can’t destroy mankind, it will provide problems. Without electricity, heating, air-conditioning, GPS and the Internet to imagine our life anymore.

The fall of an asteroid

In principle, we know how dangerous are the asteroids — in the end, one of them marked the beginning of the end of the dinosaurs. Recent research suggests that we should worry: these large space rocks can pose a serious threat to us.

Today we are only at the beginning of the study and development of systems that will protect us from small asteroids. But against bigger and more rare cosmic guests, we are completely helpless. Despite the fact that they will not necessarily destroy the Earth or make it uninhabitable, they can destroy humanity, causing a huge tsunami, fires and other natural disasters.

The expansion of the sun

If all the previous space hazards occur on a throw the dice with a certain probability, we know exactly what our sun will “commit suicide” through of 7.72 billion years. By this time it will spew their outer atmosphere and forms a planetary nebula, the remnant turned into a star “white dwarf”.

But mankind is not destined to experience the last stages. The aging of the Sun, it will become colder and more. One day it will become a star-a giant, which is large enough to reach Venus. At this point, the Earth might be safe, but the sun produces a strong solar wind, slowing the Earth. Using of 7.59 billion years, our planet just melted in the atmosphere of our excessively bloated stars.

Extremely powerful emissions of energy — the gamma-ray bursts — can be caused by a binary star system (where two stars rotate around a common center) and supernovae (exploding stars). These bursts of energy is extremely powerful, as concentrate your energy in a narrow beam, not living longer than a few seconds or minutes. As a result, the radiation of such a surge can damage and destroy our ozone layer, leaving life vulnerable to harmful ultraviolet radiation from the sun.

Astronomers have discovered a star system WR 104 — which could accommodate such an event. WR 104 is 5200-7500 light years from us, far enough away to remain safe. And we can only guess when there will be such a surge. Fortunately, there is a probability that the beam of energy at us will not get.

Supernova that occurs when a star reaches the end of his life, occur on average once or twice in every 100 years in our milky Way. Most likely, they are born closer to the dense center of the milky Way, and we are in two thirds of the way from the heart — not so bad.

Can we expect a supernova nearby in the near future? Betelgeuse — red supergiant approaching the end of his life — in the constellation of Orion is just 460-650 light years from us. It may become a supernova, now or in the next million years. Fortunately, astronomers estimated that the supernova must be at least 50 light years from us, to damage our ozone layer. Therefore, this particular supernova must not be a cause for concern.

Meanwhile, wandering star, flying through the milky Way, can approach to our sun so close, it will interact with the dense “Oort cloud” at the edge of our Solar system that contains many comets. This can lead to the rain of comets that rush to the Ground. Another roll of the dice.

The sun is also moving through the milky Way, passing through more or less dense regions of interstellar gas. Currently, we are in a less dense bubble created by a supernova. The wind the sun and solar magnetic field form a bubble-shaped region surrounding our solar system — the heliosphere which protects us from interacting with the interstellar medium. When we leave this area in 20 000-50 000 years (according to our current observations and models), our heliosphere will become less effective and bare Land. Maybe we will change the climate and become more problematic to stay — if not impossible.