Space is full of giant voids 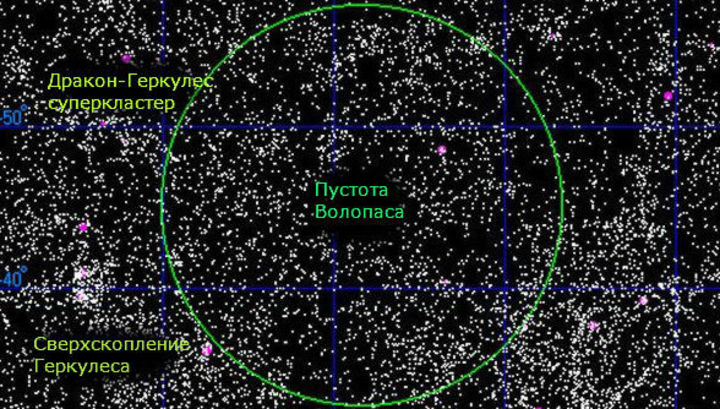 Look at the incredibly huge dark space we all a little creepy. No wonder that astronomers often prefer to focus on bright objects as possible. Meanwhile, in the pitch dark, scientists can sometimes find a better explanation of the different hypotheses about space.

So, in 1923 the American astronomer Edwin Hubble (which is in part named for the famous Hubble space telescope) showed that the universe is much bigger than expected. Scientists have discovered that what was considered a vortex of gas on the outskirts of our galaxy, was in actual fact other galaxies: the lonely islets of the worlds scientists have been able to see through the empty sea of black. The discovery led to the birth of quite a comforting thought: even the darkest area of the sky when we look through the telescope on it, dotted with groups of luminous galaxies, like our milky Way.

But there is another view of the Universe. Since 1981, when astronomers discovered free space — the Void in Bootes (Boötes void), the scientific world also learned that the universe has a sort of huge empty cold and completely dark areas. And they are much more than expected. Thus, in order to better understand the Universe, scientists just need to look at times into the abyss.

The Bootes void (which people will definitely see, looking at Bootes, the constellation of the Plowman, adjacent to the Big dipper) is not a perfect sphere with a diameter of about 280 million light years.

When scientists first saw this hole, they found in it only a single galaxy. Since then, astronomers have found several dozen galaxies, but that’s it. For comparison, we note that, for example, the Virgo Supercluster, a small area that includes the milky Way, contains over two thousand galaxies. So only a few dozen do seem a surprisingly small number.

The inhabitants of the milky Way, people can see one huge neighboring Andromeda galaxy with the naked eye. The proximity of Andromeda helped Edwin Hubble to see its individual stars to reveal the true scale of the Universe.

Often on a very large scale the universe is described as the cosmic web with filaments of invisible dark matter, bind the light structure of the Universe. Although it may be far better to think of it as a cosmic foam (soap bubbles in the bathroom). In the foam bubbles are touching, like clusters of galaxies, and between them is mostly empty.

The problem was that the Bootes Void is too big. Such voids, or holes, are growing because of their thick skins (that is, the edges of the cavity) the gravitational influence is stronger than in the middle of them.

And to explain this phenomenon, the scientists had to wait until 1998, when it was discovered dark energy: cosmic pressure, which causes empty regions of space to expand, as if someone fanned the air in each bubble Universe.

Many astronomers believe that these terrible regions of the Universe – the emptiness, can the future promise of a major discovery at their proper study. So early statistical analysis of their form could help scientists to measure dark energy, gravitation and other mysterious new powers better than ever before. It remains only to better peer into the void.

? Just gravity at work. Like a billion little Rumbas, cleaning up the mess of the big bang. The stars, planets. Proto planets, and asteroids ands rocks sweeping up anything smaller. Eventually, some parts will look like mom just cleaned your room while you weren’t looking, and you can nolonger find your Beatles white album.