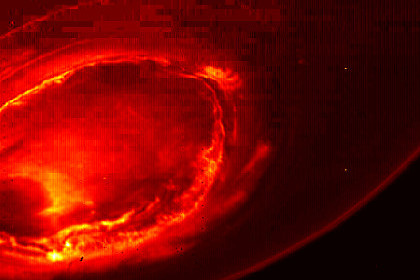 The spacecraft Juno is transmitted to Earth unique pictures of Jupiter. The message on Friday, 2 September, published on the website NASA.

Pictures were taken on August 27, when Juno successfully made my first from 36 orbits around the planet. The probe managed to capture a celestial body in previously unseen angles. Was first recorded infrared image of Jupiter close up.

This is the first infrared types of the North and South poles of Jupiter, which showed the warm and hot spots we’ve never seen before. And although we knew that the world’s first infrared views of the South pole of Jupiter could detect the Aurora, we were shocked to see them for the first time. No other devices, from the Ground or from space, could not hold the southern Aurora. High level of detail can tell us more about Jupiter, — told the researcher of the research unit of Juno, with the Institute for space astrophysics and planetology in Rome, Alberto Adriani.

As explained by the head involved in the mission group southwest research Institute, San Antonio Scott Bolton, of the images of the North pole you can get information about the storm system of the gas giant. “The pole was more blue than the rest of the planet, and in this area a lot of storms. There are no any usual signs, this image is hardly possible to find Jupiter. We saw that the clouds have shadows, and it probably speaks to the fact that clouds are located at higher altitude compared to the other elements of the planet, said Bolton.

The camera Juno helped to take snapshots of eight scientific apparatus, they managed to capture remarkable views of Jupiter’s Northern and southern polar regions in the infrared range.

“Saturn has a hexagon at the North pole. Nothing like on Jupiter there. The largest planet in our Solar system are truly unique. And we’ve got 36 flights to find out how unique it really added Bolton.

The spacecraft Juno (Juno) was launched from Cape Canaveral on the Atlantic coast of Florida, USA, August 5, 2011. Its purpose was to study gravitational and magnetic fields of Jupiter, as well as to test the hypothesis that the planet has a solid core

On orbit, the probe was released on 4 July. Juno will run until February 2018, then leave orbit, will enter the planet’s atmosphere and burnt again.