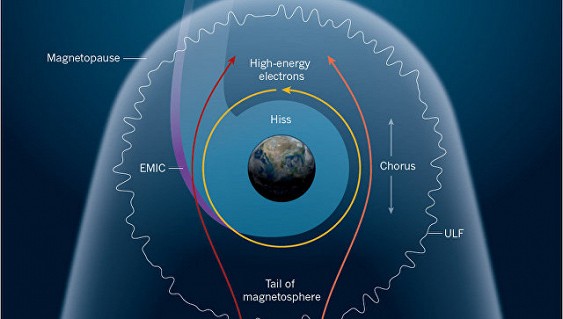 Quadruple of probes MMS helped scientists to find out that the ultrarays posing a threat for health of the person can be born in remains of the far dead of stars thanks to the unusual ripple “walking” on shockwaves in emissions of supernew.

“The MMS satellites for the first time allowed us to obtain data on structure of shockwaves at so small scales. And straight visions behind it allowed us to understand opening of “ripple” in shockwaves how such structures can arise and what properties they have. We approached closer a comprehension of how shockwaves can generate ultrarays” — Andreas Johlander from Institute of space physics in Uppsala (Sweden) tells.

Ultrarays represent the heavy ions of various elements dispersed to the okolosvetovykh of speeds by the peculiar natural “accelerator of particles” as which as today scientists consider, supernew stars generally act. Scientists actively study today such beams as they pose a threat for normal operation of electronics, health of the person and were even bound to decrease in sharpness of mind at astronauts.

Particles in their remains, according to the modern representations, accelerate to very high energies as a result the shockwave generated by explosion of a star interferes with with earlier dumped external covers of a star, warms this matter and forces a part of its catapult atoms in the open interstellar environment.
Earlier, as Yokhlander notes, scientists considered that this wave is, in fact, a flat object which just faces concentrations of weight and transfers them the energy. “Quadruple” of probes MMS launched by NASA in March, 2015 allowed physics to check for the first time, whether so it actually.

For this purpose authors of article watched the progressive time what occurs on border between “a magnetic board” of Earth, protecting us from the charged particles, and a solar wind where there is an area similar to that which is between a shockwave supernew and its gas-and-dust “cocoon”.

In October of last year there was a potent coronal emission of plasma in the Sun which “squeezed” a magnetosphere of Earth and allowed the probes MMS “to plunge” into clear plasma of a solar wind and to trace what occurs in a point of its contact with a magnetic board of the planet.

These observations unexpectedly showed that actually in a shockwave there are structures which physicists called “ripple” – the periodic vibrations reducing or increasing force of a magnetic field. This ripple if it exists in shockwaves in supernew, can serve one of the main mechanisms of dispersal and emission of particles of remains of the died stars, and further studying of this process by means of the probes MMS as Yokhlander and his colleagues hope will help to understand, how exactly it occurs.