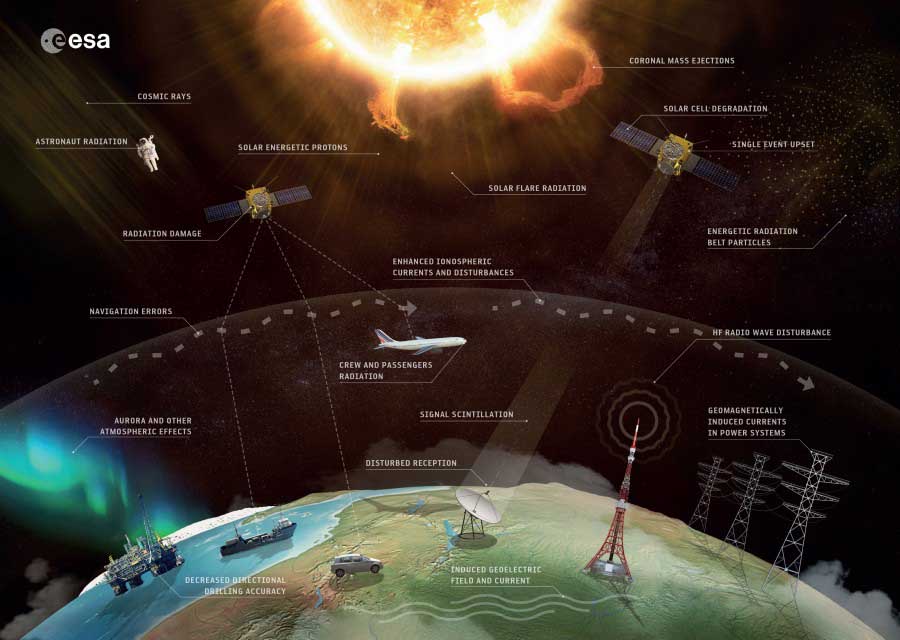 This infographics shows the main effects of space weather on technology and people.

The term space weather usually refers to the aggregate of all conditions in the circumterrestrial space, mainly determined by our luminary. One of the most visible manifestations of space weather is the interference that occurs in systems of global positioning and radio communication during powerful solar flares and coronal mass ejections. Increased solar activity also leads to “inflation” of the upper layers of the earth’s atmosphere. This can cause a decrease in the orbits of spacecraft and, in some cases, even their premature descent.

Another important factor of space weather is radiation. It leads to gradual degradation of solar panels and electronics, which reduces the efficiency of space satellites and shortens their life. Radiation also shows the impact on the health of astronauts. Over the course of the day, ISS crew members receive a dose of radiation of about 1 millisieverte, which is roughly equivalent to irradiating a person on Earth for a year. It should be remembered that the ISS is covered by an earth’s magnetic field. If you go beyond it, the radiation level will increase.

Cosmonauts are not the only people who can be exposed to cosmic radiation. Pilots and passengers of aircraft flying at high altitudes, too, can receive more than usual doses of radiation during solar flares.

In addition, during the most powerful geomagnetic storms in long conducting systems on Earth, parasitic currents can occur that affect the operation of power supply systems. The most famous in this sense is the accident caused by the magnetic storm on March 13, 1989, during which 6 million people and most of the industry of Quebec were left without electricity for 9 hours.