SpaceX and the prospects of colonization of Mars 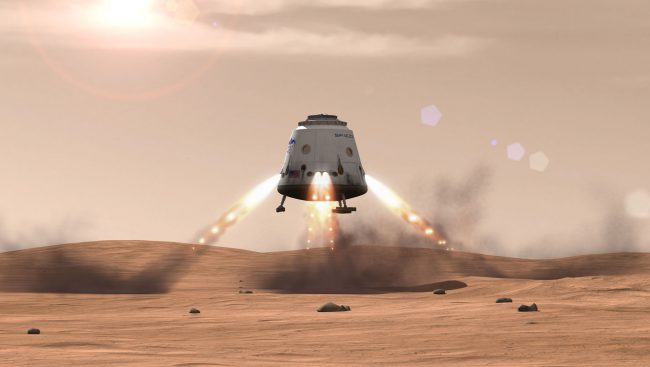 Today we are watching with interest the way the SpaceX rocket lands on the floating platform vertically. Tomorrow we are already looking out the window of the Martian dome (will there be windows in it) to admire the blossoming tomatoes. Between today and tomorrow – a chasm long in … theoretically – 10-20 years. In practice, humanity has not seen such progress in the last 50 years.

Incredibility of mass colonization of Mars

The target of 1 million inhabitants on Mars is unreal. With the help of the Mars Colonial Transporter, which will carry 100 passengers at a time, it will take 10,000 flights to simply take people to the Red Planet.

But the material support will be 10 times more. Ilon Mask himself admits that the system will need 110,000 flights.

Even with one flight a day, it takes 301 years. And if the flights are daily, and the round trip will take more than a year (because when Mars goes on, the journey will be longer), it will take 425 reusable spacecraft. This is more than any company or even a country can afford.

To finance passenger transport, the Mask will have to find a million people ready to pay $ 200,000 for a voluntary life in hell. Only the poor and the poor could venture and try their luck to earn money. But they will not have 200,000 dollars.

Mask could find a million people who want to go there and find a good job, but then someone else will have to pay for the trip and pay people a salary.

The sale of tourist trips can not pay for flights. Hardly SpaceX will manage to find many groups of 20 people willing to pay $ 1 million to pay for 80 tickets, especially when space travel will become quite common.

It will not be a month on the Moon or on a tourist space station. People will spend about two years living in hell plus free radiation for breakfast, lunch and dinner. Do you see that someone voluntarily went to live in Antarctica, which in terms of a bit like Mars? Me not.

Therefore, unless Mars is rich in minerals or other very valuable resources that will pay for travel (people and resources will go to Mars and minerals to Earth), with our current technology of space travel, Mars will be very dependent on the Earth, and will There are several hundred settlers.

We will be a two-planetary species, but the second planet will have to be bad if the first planet does not feel good. Only with new technologies of space travel Mars can become autonomous.

The goal of making humanity a species living on two planets is very worthy in terms of ensuring our survival for millions of years. But ordinary people who worry more about how to pay for a communal and taxes, do only feasible practical things and hope for the best. They will not put their lives on the line to go to Mars and contribute to the survival of people as a species.

And since the massive colonization of Mars is economically inexpedient, this will not happen.

SpaceX deserves respect for its capabilities

In any case, it is worth paying tribute, even if the plans for the colonization of Mars seem too optimistic, SpaceX has already proved that it can quite reach Mars. Mask is like a possessed person. He will not rest until he brings people to the Red Planet.

Until now, he was paid by NASA for sending and returning cargo to the International Space Station with excellent results.

After some delays, SpaceX will launch its Falcon Heavy rocket this summer and, possibly, start sending NASA astronauts to the International Space Station in 2018 (or 2019). They also promise the first unmanned flight to Mars in 2020 (although initially it was planned for 2018).

Of course, if some NASA astronauts (or advertised tourists who fly to the Moon in 2018) eventually die as a result of the disaster, we will be waiting for another delay, for many years. Do not interfere with SpaceX with all those dreamers who dream big plans, not a name a penny for the soul.

If SpaceX can send people to Mars faster than NASA (SpaceX says about 2025, but the recent delay of the first unmanned flight suggests that these terms are unrealistic), even with the help of NASA (if NASA realizes that Mask is really ready to do it, The agency will also join), Mask will take a worthy place in history, next to von Braun and Korolev (and not with Gagarin or Armstrong, they are worthy people, but their merit is provided by other people – many could be in their place).

Even Trump could help. He chose Mask as one of his advisors. Mask could use Trump’s huge ego, whispering to him that Trump will share the historical glory if he orders NASA to join SpaceX in the Martian epic (and forget about the Space Launch System).

Of course, Trump can not solemnly announce: “We conquered Mars: I made America great again!”, Because it will not be in office. History does not remember him.

Why should we fly to Mars?

For mankind it would be absolutely fantastic in terms of pride and self-esteem to get to Mars and establish a permanent station for research and small tourism, but until we find economic reasons to do more, we will not be able to do more.

You could say, dammit, are we going to spend billions to amuse our ego (to have fun) when we could spend this money on poverty alleviation and the treatment of diseases?

Well, we spend much more (trillions) just like that, on millions of different things.

Just think about how much the film industry spends on making movies. Many of them already now cost more than 300 million dollars. The budget of the “Martian” was 108 million. Mission Mars Semi-direct, a very low-budget mission involving people to Mars, would cost $ 55 billion.

But Ilon Mask says that he can build a Martian missile for 10 billion dollars. You can even increase this amount to 20 billion, including the cost of other possible things. Yes, it can cost more, but let’s just take this number. This is the cost of 66 films with a budget of 300 million each. Is it worth it?

Obviously, the task of making humanity a multi-planetary species is still feasible from a scientific and economic point of view, so we must have other reasons not to do so.

We can say that the future of people is inextricably linked with the cosmos, because the Sun will burn out and destroy all life on Earth in 3-4 billion years.

But it will be so far in the future, that our chances to complete the existence of this are much higher.

Let’s not argue, the trip and the creation of the Martian base will improve our technologies and, maybe, even lead to scientific breakthroughs. But we do not want to Mars for other reasons.

We could go for it, even if there were no technological advantages. There’s even no life there.

We do many expensive things for no particular reason. The economy is just a tool to achieve our goals, and all of them are exclusively psychological.

In the 60s of the last century, the US and the USSR spent billions on the race for the moon, simply trying to show the world the best political system.

Mask insists that we are obliged to become a multi-planetary species to rationalize our aspirations, but he will not see this in his life (unless he starts investing in immortality research).

Sometimes he admits that the real goal is to do inspiring things. He means historical events. He seeks his place in history, trying to earn his own immortality. And there is nothing wrong with that. It’s people like him who brought us out of the Stone Age caves, as most of us did not and will not do anything really important throughout our lives.

We want to visit Mars, because it will make us proud that we are people, like nothing else. And that’s why we want to get to Mars earlier than before any asteroid, even if there are more valuable minerals on the asteroid.

Of course, if you wait another 50 years, you can do it for less money and with fewer risks, but why give all the glory to our children and grandchildren?

Since our fathers and grandfathers have missed their opportunity, we can do it. And if I say “we”, it does not mean that I will play a role in this journey. So people talk about sports successes: they never say that their club or country won – they say “we won”.

It is this collective appropriation of the successes of other people that gives so much psychological significance to events that in reality have practically no relation to our life (at least in the short term), like the same visit to Mars.

We all will play a role in this historic success for humanity. It does not matter if it’s the United States, Russia, Madagascar or an individual. We will go to Mars for psychological reasons, because this is the meaning of life.