Australian radio astronomers surveyed 83% of the sky in less than two weeks and discovered a million new galaxies. Until recently, scientists could not even dream of such speeds.

The achievement is described in a scientific article published in the journal Publications of the Astronomical Society of Australia.

The researchers used the latest ASKAP radio telescope. One of its features is a huge field of view. It is tens of times more than that of other telescopes of comparable sensitivity.

To cover all the available areas of the sky (which is 83% of the celestial sphere), ASKAP only needed 903 separate images. This allowed the instrument to complete a survey of the entire available sky in less than three hundred hours.

No wonder the new survey was called Rapid ASKAP Continuum Survey (RASP), that is, a fast continuous survey using ASKAP. It is really fast, because not so long ago research of this magnitude took years.

The downside to this speed is huge amounts of data. The number of bytes that the telescope generates per second exceeds the volume of Internet traffic throughout Australia (!). For the RASP survey, 13.5 exabytes of raw data were collected. This abyss of information was processed by supercomputers in almost real time. After processing, the new map of the Universe took “only” 26 terabytes. 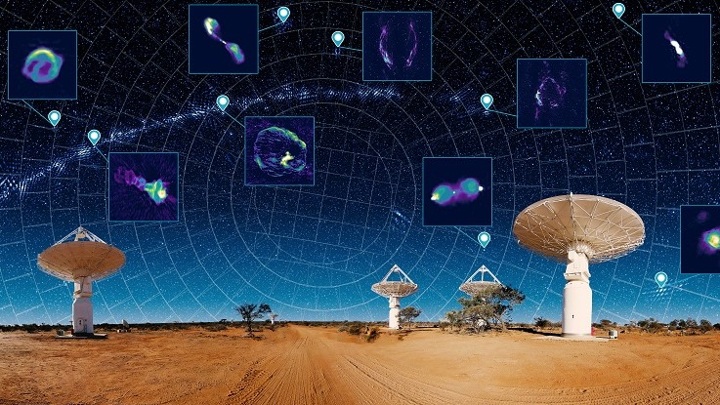 After just a two-week survey of the sky, astronomers have mapped three million galaxies.

In terms of sensitivity (the ability to fix faint objects), RASP is five times higher than the best previous surveys of the same sky regions. In terms of resolution (the ability to distinguish fine details of an image), it is twice as superior to analogs.

As a result, the researchers identified about three million galaxies in the images. Scientists have determined their coordinates and checked if they had previously come into the field of vision of astronomers. It turned out that about a third of the detected galaxies are not listed in any catalogs. That is, they were discovered thanks to the RASP review.

By the way, the obtained images of the sky and the catalog of observed galaxies will be made publicly available on the CSIRO Data Access Portal.

We add that this is just the beginning of work. Astronomers are already planning a new survey using the ASKAP radio telescope. It will take longer, but it will allow you to achieve greater sensitivity. As a result, scientists hope to map tens of millions of galaxies.