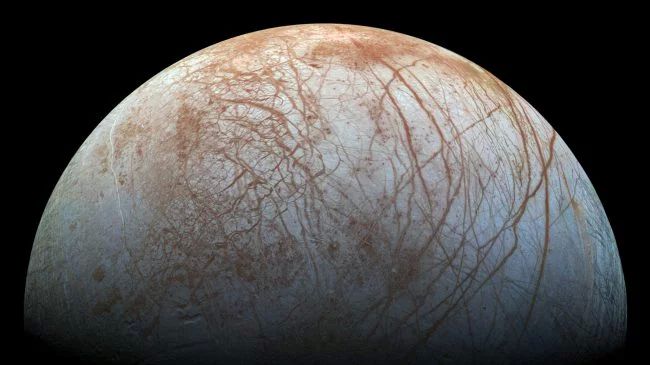 The satellite of the gas giant Jupiter Europe is of great scientific interest. Under the icy crust of the moon is a vast ocean in which the water can be even more than in any terrestrial. The presence of water is one of the indicators of the possible presence of life. Scientists have long been eyeing Europe and are thinking about how to land some research apparatus there. But, apparently, this will be even more difficult than previously thought. According to the findings of a new study of planetologists, published in the journal Nature Geoscience, the surface of Europe is covered with huge sharp ice spikes, which will significantly impede landing.

In the new work, scientists modeled how ice structures form on the surface of Europe. The researchers claim that the satellite is covered with a forest of ice needles, whose height reaches 15 meters. They are formed as a result of sublimation – a process in which ice turns immediately into water vapor, bypassing the liquid phase. Special conditions are necessary for their formation: a lot of light, as well as a very cold, dry environment with no air flow.

There are similar formations on Earth – they are called Calgaspores or “penitent snow”, and are found in the dry and cold highlands of the Andes. Initially, irregularities on the surface of the ice work as a positive feedback – the depressions are slightly darker, absorb light more efficiently and melt faster, while the bumps remain bright and most of the radiation is reflected. As a result, high and thin ice elevations are formed.

Small Calgaspores in the Atacama Desert (Mexico). On the surface of Europe there are similar structures, but they are much higher

According to the authors of the study, the conditions for the formation of giant calgaspores on the surface of Europe are ideal. First, the surface itself is a solid ice cap. Secondly, it is very cold there (temperatures up to – 165 degrees Celsius). In combination with other factors, an ideal medium for sublimation is created.

Scientists note that they did not see directly the Calaspores in Europe (the quality of the obtained photographs of the satellite’s surface from orbit is not enough to be seen), but indirect evidence indicates their presence.

Using previously collected observational data, the researchers calculated the level of sublimation in different regions of the surface of Europe, which made it possible to establish the size and distribution of the calaspores. Taking into account various erosion processes in Europe, such as the fall of small meteorites and the irradiation of charged particles, astronomers predict with their model that the height of these objects can be 15 meters, and they can be located approximately 7 meters apart. At the same time, scientists note that, most likely, these objects are found in equatorial regions of Europe. The presence of Calgaspor can be confirmed by the energy anomalies that scientists have noted earlier during satellite surface surveys using radar.

Researchers note that new observations with more advanced scientific tools are needed to confirm the presence of calgaspores on the surface of Europian. Fortunately, such an opportunity can really come out pretty soon. NASA Aerospace Agency is developing the Europa Clipper mission, the launch of which should take place somewhere between 2022 and 2025.

An orbital probe equipped with the latest instruments will be able to approach the satellite surface at an altitude of 25 kilometers and from there look for calgaspores. It is assumed that, in general, the results of the Europa Clipper mission will be the starting point for the preparation of a further mission to disembark a spacecraft on the surface of Europe. This unit will be able to drill the icy surface of the satellite and look into the dark under-ice world of its ocean. Nevertheless, the presence of spikes on the surface will significantly complicate this task, unless you take into account the technical complexity of such a mission.