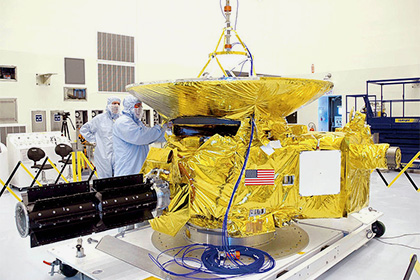 Station New Horizons took the pictures Kawara — one of the largest celestial bodies in the Kuiper belt, located beyond the orbit of Neptune. It is reported by NASA.

Quaver science instrument LORRI (Long Range Reconnaissance Imager) observed from 13 to 14 July 2016 four times, each of which was done with 24 images, which provided a total exposure time of 39 seconds.

NASA also revealed the surface of Pluto taken by New Horizons in July 2015. It shows the area of the dwarf planet, located South of
of the equator. He got the name of the region of Cthulhu. The bulk of it is mountainous.

Methane frost on the Cthulhu region marked by the green arrows

As shown by the data from New Horizons, the tops of the mountains are covered with water ice, and methane frost condensing from the atmosphere of the dwarf planet. Between the mountains lie valleys, in width up to several kilometers, and a length of several tens of kilometers.