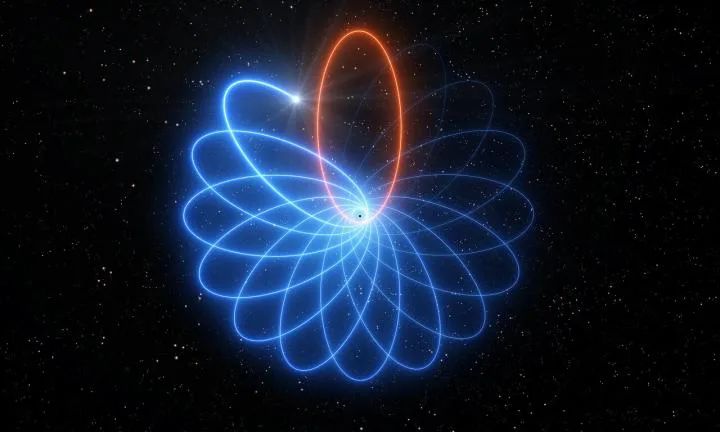 Scientists from the Max Planck Institute for Extraterrestrial Physics (Germany) received the results of a study lasting 27 years. An article with conclusions confirming Einstein’s General Theory of Relativity was published in Astronomy & Astrophysics.

Star S2, which revolves around a supermassive black hole, Sagittarius A *, located in the center of the Milky Way, does this in a “rosette-like” orbit, and not in an elliptical one. That is how it should have moved if the General Theory of Relativity was true, which assumes that the connected orbits of one object around another are not closed, but precess along the plane of motion. On the contrary, if the movements of celestial bodies obeyed only the principles set forth in the Newtonian theory of gravity, then the star would move in a closed elliptical orbit.

The longest and most accurate set of observations, measurements and analysis planned by the researchers and carried out using VLT devices (Very Large Telescope) helped to find this out.

Most stars and planets have a non-circular orbit and therefore move closer and further from the object around which they rotate. The orbit S2 precesses, which means that the location of its nearest point to the supermassive black hole changes with each rotation, so that the next orbit moves with the rotation relative to the previous one. If you keep all these twists and turns, the result is a figure of “petals”. For the first time, a similar effect was discovered in the motion of Mercury around the Sun. This bias, discovered in the middle of the nineteenth century, prompted physicists to seek an explanation, which was given by Einstein.

The general theory of relativity provides an accurate prediction of how the S2 orbit was to change, and the data obtained as a result of a study by the authors of the work exactly match this forecast. This effect, known as the Schwarzschild precession, has never been measured before for a star orbiting a supermassive black hole. The detection and confirmation of the effect on celestial bodies such as Sagittarius A * and S2, not only confirm the Theory of Relativity, but also help to learn more about these objects.

Sagittarius A * and the stars forming clusters around this compact source of gravity are located 26 thousand light years from the Sun. In a way, this is a natural “superlaboratory”, which makes it possible to test physical and astronomical theories in unique conditions of extreme gravity. The motion of the S2 star makes it one of the closest to the supermassive black hole known to mankind.

“Since the S2 measurements very well follow the General Theory of Relativity, we can set strict limits on how much invisible material, such as distributed dark matter or possible smaller black holes, is present around Sagittarius A *. This is of great interest for understanding the formation and evolution of supermassive black holes, ”said Guy Perrin and Karin Perrault, lead scientists of the project.

It took astrophysicists 27 years, since one S2 revolution around a black hole takes years. To accurately track changes in the orbit, scientists used VLT tools located in the Chilean desert of Atacama. Researchers made 330 “approaches”, measuring and analyzing all the features of the S2 position.

In addition to German scientists, their colleagues from France, Portugal, Germany and ESO participated in the project. The GRAVITY collaboration they created, named after one of the devices for VLT, two years ago discovered yet another proof of the General Theory (a change in the light waves emanating from S2). With the advent of a more accurate Extremely Large Telescope, the team hopes to get even more detailed information from both the General Theory of Physics and the data on the properties of the black hole and its satellites.