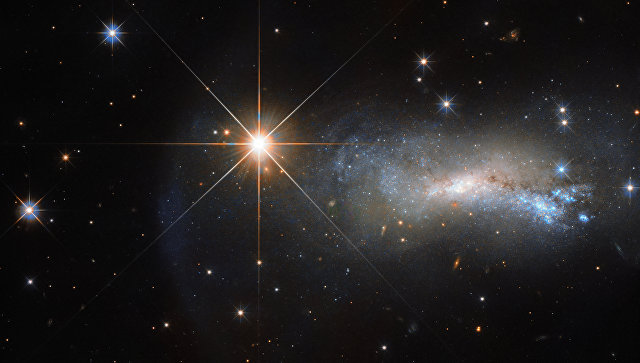 The Hubble Orbital Observatory photographed the almost invisible super bright galaxy NGC 7250 in the constellation of the Lizard, whose light is “clogged” by the powerful flux of the TYC 3203-450-1 star, according to the site of the space telescope.

This phenomenon is explained by the fact that TYC 3203-450-1 is on the way between Earth and the galaxy, which is 45 million light-years away. The star itself is located several dozen light years from our planet within the Milky Way, and because of this it seems much brighter than NGC 7250, one of the most active galaxies in the universe.

Astronomers say that we will never know the exact position of the stars
Such an interesting coincidence, as noted by the members of the scientific team of Hubble, is an excellent illustration of the main problem of astronomy – determining the distance to stars and other light sources.

Since we see a “flat” rather than a three-dimensional night sky, scientists have to constantly look for new methods for estimating the real distance between stars and farther objects and where in the sky they are located. The real and visible position of the stars often does not coincide because of many side-effects, including the movement of the Earth around the Sun and the “rocking” of the axis of rotation of the Earth, which forces scientists to make adjustments to the calculations.

Most of these techniques work in a very narrow range of distances and types of objects. For example, the annual parallax method, which focuses on the displacement of the star relative to farther objects as the Earth rotates around the Sun, works only for the nearest stars, which are not more than 2-10 thousand light-years distant from us.

Another type of cosmic “rulers”, variable stars-cepheids, allow us to calculate the distances within the galaxy a little less accurately, and supernovae of the first type – in the Milky Way and its “neighbors”.

The combination of these methods is called the “space ladder of distances,” and scientists are constantly working to improve all of its “steps” to understand how the universe works. Today, the main instrument for solving this problem, apart from Hubble, is the European GAIA stargazing probe, which recently calculated the position of almost a billion luminaries in the Milky Way.