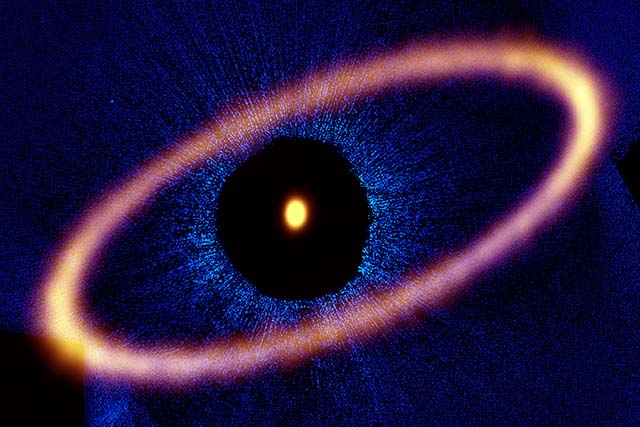 Compositional image of the Fomalhaut star, obtained in two ranges of the electromagnetic spectrum: optical and millimeter. The optical image was obtained on the orbital telescope. Hubble a few years ago. It is shown in blue. And orange shows that he saw the ALMA radiointerferometer in observations at the end of 2015. ALMA is a complex of several tens of twelve-meter antennas, designed for observations in millimeter range and located in the Chilean Atacama Desert in South America. ALMA stands for Atacama Large Millimeter Array.

What do we see in the picture? The spot in the center is not the disk of the star, but the way the star sees ALMA because of its final resolution. The real size of Fomalhaut is much smaller. The black area is a screen that, when observing on the Hubble, the star was closed, so that its bright light scattered inside the telescope would not interfere with its surroundings. This diffused light is seen as the non-uniform “rays” emanating from the center of the image.

In addition to the star itself, there is also a bright ring (often referred to as a “disk”, debris disk – “disc of debris” or belt – “belt”) left after the formation of the Fomalhaut system. This is a fairly dense ring, consisting of small fragments of ice, stones, dust and gas. It has a diameter of about 140 astronomical units, which is almost 5 times the radius of the orbit of Neptune in our solar system. In the original Hubble image (without the ALMA image superimposed on it), this ring is also viewed, but not so well and in detail.

How does the residual disk form? Everything begins with the collapse of a dense interstellar cloud. The density perturbation in it (accidentally or under the influence of external causes) leads to the formation of a slightly denser bunch with slightly greater gravity. His attraction gathers the nearest substance, the clot becomes denser and heavier, its gravity becomes stronger, and everything repeats again. So in the end the big cloud gathers into a dense compact gas cluster, inside which temperature and pressure rise and thermonuclear reactions begin. So there is a star. The same substance of the cloud, which did not become part of the star, forms a protoplanetary disk around it.

The fact is that since initially the cloud rotates around its axis a little, then along the axis along this axis the centrifugal force on the substance does not work, and the collapse proceeds quite effectively. But in the transverse direction the centrifugal force prevents complete collapse, thus forming a disk structure. For the same reasons, our Galaxy also has the form of a disk. From the substance of the protoplanetary disk, planets are formed, and their interaction with the residual building material can ultimately lead to the formation of a relatively dense belt of matter on the edge of the planetary system.

The remaining disk of Fomalhaut was discovered twenty years ago. But the new ALMA observations allowed him to explore with record detail.

What is interesting for science: The glow of a disc is the thermal radiation of its substance, heated by the light of Fomalhaut. If you look at the ring, you will see that its upper and lower edges glow brighter than the left and right edges. This is the apocentre and pericenter of the ring, that is, the most distant and closest point to Fomalhaut. The increased luminescence of the pericentre arises from the fact that the particles located closer to the star are heated more strongly. And the glow of the apocenter, suspected a few years earlier and finally confirmed by ALMA, arises for a very interesting reason. The fact is that the remnant ring of Fomalhaut is a swarm of particles and fragments that move around the star according to the laws of celestial mechanics (Kepler’s laws).

According to these laws, all the bodies in the apocentre are moving a little slower than when they pass the nearest point to the star. As they move more slowly, in this region a kind of a cork of particles is formed, that is, their density increases, and the velocity decreases. Because of this, the total luminescence of the entire region of the apocenter in comparison with the neighboring sections of the ring increases. Measurement of the ratio of brightness of the apocenter and pericentre allows us to reconstruct the distribution of particles by their size and the ability to absorb light from the central star, which was done.

In addition, about ten years ago, Fomalhaut was found a possible planet – Fomalhaut b. This object is observed as a weak point source, moving along an elongated orbit around Fomalhaut. However, there are still doubts about its physical nature: is it really a planet or, for example, a compact cloud of dust and gas? This object was also confidently detected during observations on ALMA, which allowed to estimate its mass (assuming that it is still a cloud), which turned out to be very small – a thousand times less than the mass of the Moon.

Why do you need to know: Fomalhaut as a star is pretty close in its characteristics to the Sun. Moreover, it is more than 10 times younger. Therefore, studying this planetary system, we seem to see ours, but as it was in the era of the so-called “late heavy bombardment” (English Late Heavy Bombardment) – an important period in the history of the formation of the Earth.