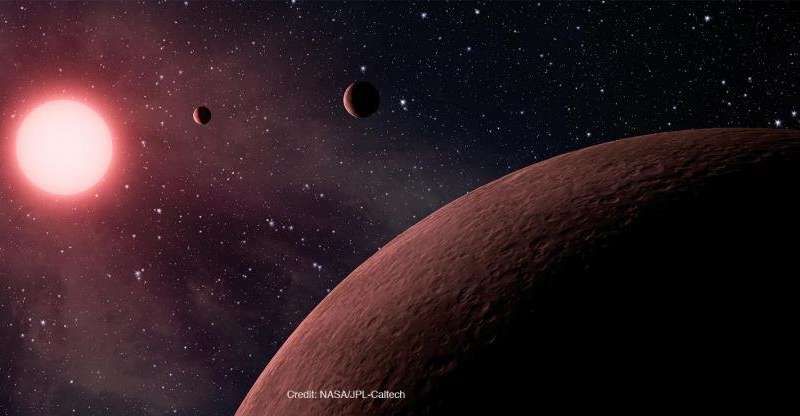 In a new study, scientists led by Chuanfei Dong of the Princeton Laboratory of Plasma Physics at the US Department of Energy and Princeton University found that charged particle fluxes from dim stars called red dwarfs can effectively blow off exoplanet surfaces, revolving around these stars, the atmosphere, eventually turning the planet into lifeless arid deserts.

For the existence and development of life on the planet requires liquid water. If the planet is too close to the parent star, then the radiation of the star heats it to high temperatures, and the water evaporates quickly. If the planet lies too far from the parent luminary, the water on the surface is in the form of ice. And only if the planet lies at the “correct” distance from the star, on its surface, the existence of water in a liquid form is possible. The range of such “correct” distances in the planetary system of the star forms the so-called “inhabited zone”. In two new scientific papers, the Dun group presents models developed by it that show that the stellar wind – the streams of charged particles emitted by the star – can lead to the loss of a planet lying in the inhabited zone of the star, a significant part of its atmosphere for hundreds of millions of years, then It takes several billion years to develop life on the surface of the planet.

Applying the models he developed to the planet of Proxima Centaurus b, Dun found that the high pressure of the stellar wind causes the loss of the planet’s atmosphere into space, as a result of which the total duration of the atmosphere is insufficient to develop on the planet’s surface of life in the forms in which it is known to us.

“Our results show that Proxima Centauri b and similar planets in general are not able to keep the atmosphere for a long enough time for the evolution of life at a high pressure of the stellar wind,” said Dun. “Only if the pressure of the stellar wind is relatively low, and the exoplanet will have a sufficiently powerful magnetic field, such as the Earth’s magnetic field, can we talk about its possible habitation.”