Station “Juno” recorded storms in the northern hemisphere of Jupiter 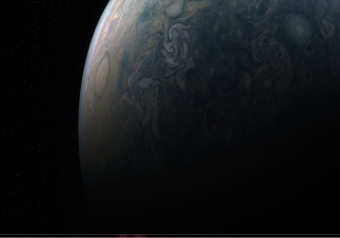 The image taken by the cameras of the automatic interplanetary station Juno (NASA), demonstrates the powerful storms that are walking in the northern hemisphere of the gas giant Jupiter.

Like our native planet, Jupiter has cyclones and anticyclones. In the presented photo is visible a jet, which received the designation N6. It is visible on the right. In addition to this feature of Jupiter, here is also seen the Northern Little Red Spot.

The photos that formed the basis of this mosaic image were taken on July 16 of this year, as part of the 14th demonstration flight near the gas giant. At that time, Juno was approximately 17,000 kilometers away from the upper clouds of the planet at a latitude of 59 degrees.

The creation of the mosaic image involved scientists Brian Swift and Sean Doren. To do this, they used the data from the JunoCam imaging unit, which is installed on the Juno probe.

The purpose of Miss JUNO is to analyze the characteristics of Jupiter as a representative of gas giants.