“Stellar cannibalism” turned the star into a brown dwarf 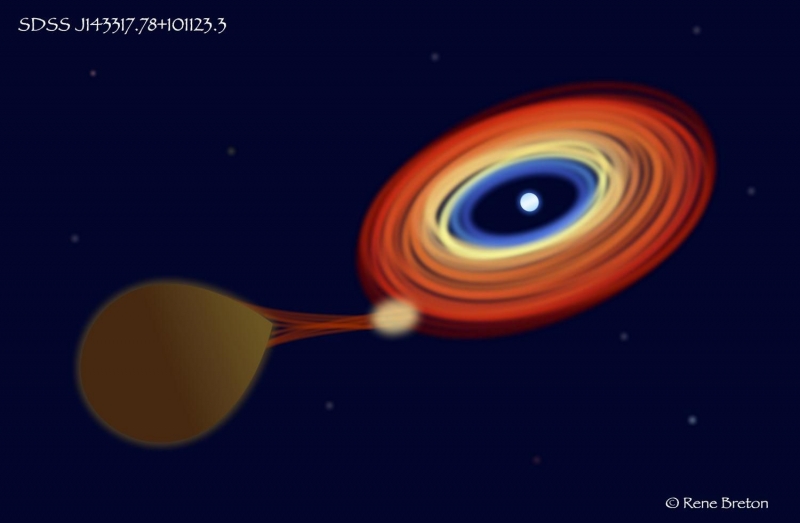 Astronomers have discovered subsidy object that was once a star, but as a result of absorption by the companion – a white dwarf – lost “membership in the star club”.

An international team of astronomers, led by Juan Hernandez Venanzo with Santisteban from the University of Southampton, England, made the discovery, watching a very dim binary system J1433, which is at a distance of 730 light years from us. This system consists of a single object of small mass – the mass of approximately 60 Jupiter masses – located on extremely narrow orbit with a period of 78 minutes around a white dwarf (the remnants of stars like our Sun).

Due to this close proximity, a white dwarf pulls matter from a lower mass companion star. In this process, the less massive star lost approximately 90 percent of its mass, with the result that she turned into a brown dwarf.

This study was conducted using the X-Shooter mounted on the ESO’s Very large telescope, located in Chile, which allowed directly to detect and characterize this system, where there is such a transition unusual astronomical object from one class to another.

In addition, the work scientists have compiled a map of temperatures on the surface of this brown dwarf. As it turned out, the difference between the average surface temperature is maintained at the “full” (turned to white dwarf) side and “night” (opposite day face) side of the brown dwarf is 57 degrees Celsius, while the maximum temperature difference between the hottest and the coldest points on the surface of the brown dwarf reaches 200 degrees Celsius.

The work was published in the journal Nature.