Stephen Hawking was going to fly into space 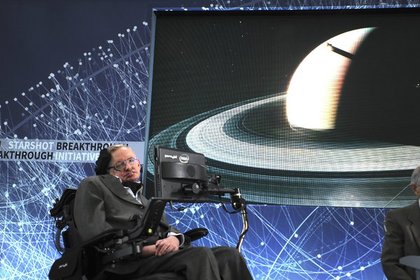 The famous British physicist Stephen Hawking said that he is going to go into space on a ship company Virgin Galactic. According to the electronic version of the Daily Mail, he said this in an interview with Good Morning Britain, which will be released on ITV on Monday, March 20, at 06:00 am British time (09:00 MSK).

To the question that he was happy, the scientist replied that three children had brought him the greatest joy. “And I can tell you what will make me happy – a journey into space. I thought that no one would take me there, but Richard Branson (owner of Virgin Group, which includes Virgin Galactic, “Lenta.ru”) offered me a place in Virgin Galactic, and I immediately answered “yes,” he said. .

At the end of September, 2016, The Guardian published an excerpt from the book of the researcher of black holes “How to create a spaceship,” in which the author called on humanity to conquer other planets. Hawking believes that life on Earth is in ever-increasing danger and can be destroyed as a result of a natural disaster or anthropogenic disaster.

Developed by Scaled Composites LLC and built by The Spaceship Company by order of Virgin Galactic, the glider is designed to conduct tourist flights up to a height of about a hundred kilometers: to the boundary of the Earth’s atmosphere with cosmos, but without reaching its orbit. The cost of travel for each of the six passengers will be about 200 thousand dollars. Tickets have already booked about 800 people, including, in addition to Hawking, the actress Angelina Jolie and the singer Lady Gaga.

Stephen Hawking is known for his work in cosmology and the popularization of science. He was the first to publish an article about the possibility of black holes evaporating. In 1963, while studying at Oxford University, he was diagnosed with a rare chronic central nervous system disease – amyotrophic lateral sclerosis. Almost 20 years after tracheostomy, the scientist lost the ability to speak and has since used a speech synthesizer. Since 1997, he moves on a wheelchair with a computer. Heavy disease did not prevent Hawking from becoming one of the most famous modern theoretical physicists and organizing a personal life. On January 8 he turned 75 years old.