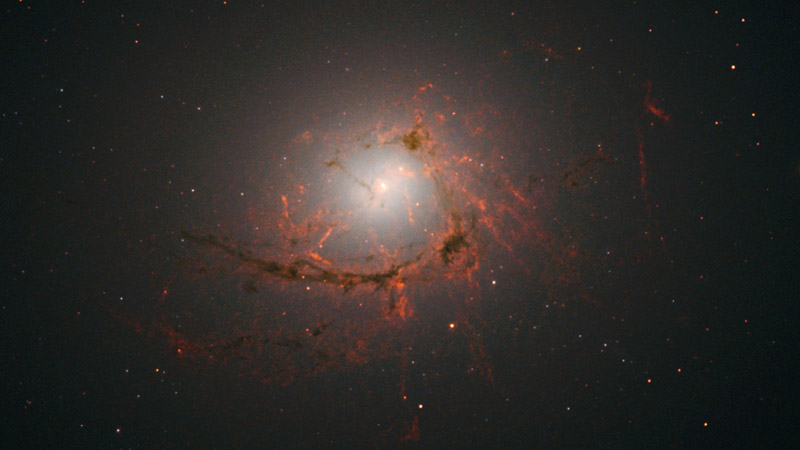 A new image taken by the Hubble telescope shows a galaxy that is strangling tentacles of gas and dust. Such a strange and whimsical form of this celestial object caused by a supermassive black hole located in the center of the galaxy and the black hole the galaxy kills.

Galaxy got a room NGC 4696 and is located 150 million light-years from us. It takes the form of a standard ellipse, but in it there is a remarkable strip of curving fibers, consisting of dust and ionized hydrogen. New research suggests that these features guilty black hole in the center of the galaxy. It also keeps the galaxy to create new stars, which means, in fact NGC 4696 is dead.

With the help of Hubble, scientists from Cambridge have been able to measure these dust fibers, and found that they are about 200 light-years in diameter, and the density 10 times the density of the surrounding gas, and they have gas in the galaxy, with its nucleus.

The energy generated by the black hole, heats nearby gas, sending streams of hot substances to the outside and brings with him a fibrous material, and even the magnetic field of the galaxy.

In the result, the magnetic structure, penetrating a celestial body, do not give gas to form new stars. Without new stars, current stars in the galaxy will eventually grow old and disappear, and the entire heavenly education will thus come to an end.