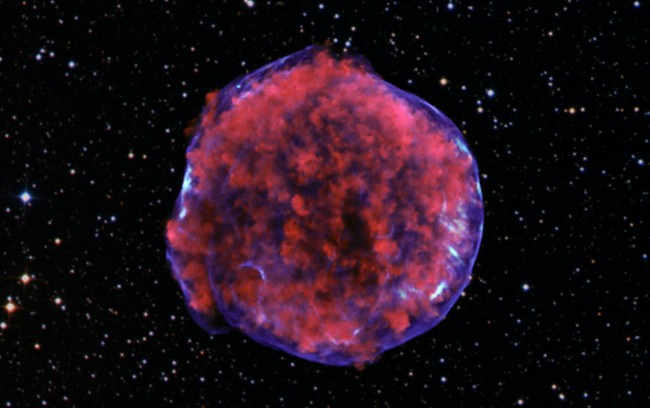 The supernova SN 1572 in 1572, discovered by the Danish astronomer Tycho Brahe. This discovery made him world-famous, and the supernova was named in honor of its discoverer. Since then has passed more than four centuries, but the remains of stars still continue to expand in all directions.

Modern astronomers from NASA for the last 15 years watching this process with an x-ray space telescope Chandra. Over the years they’ve managed to make some quality pictures of which they glued amazing animation.

Tycho Brahe himself wrote about his discovery the following:

“One night when I as usual, examined the sky, which I know so well, I, to my indescribable surprise, saw near the Zenith in Cassiopeia bright star of extraordinary magnitude. Impressed by the discovery, I didn’t know whether to believe my own eyes. New star had a tail, it is not surrounded by any nebula, it is in all respects like other stars of the first magnitude. The brilliance of her could only be compared with Venus, when the latter is in the nearest distance from the Earth. People, gifted with good sight could distinguish this star in a clear sky during the day, even at noon. At night under a cloudy sky, when all other stars were hidden, the new star remained visible through some pretty heavy clouds.

The supernova is at a distance of 10 000 light years from Earth. Scientists have always wondered why the right part of it is expanding faster than the left. According to one theory, this asymmetry is connected with different density of the gas surrounding the supernova. Hard to imagine it, but the rate of expansion is Quiet in some places reaches an incredible 19 million miles per hour. We offer you to watch a small video that was prepared by experts of NASA. They themselves call their work “a great summer blockbuster, which you will not see in cinemas”.