Surrealistic picture of the clouds of Jupiter on the picture “Juno” 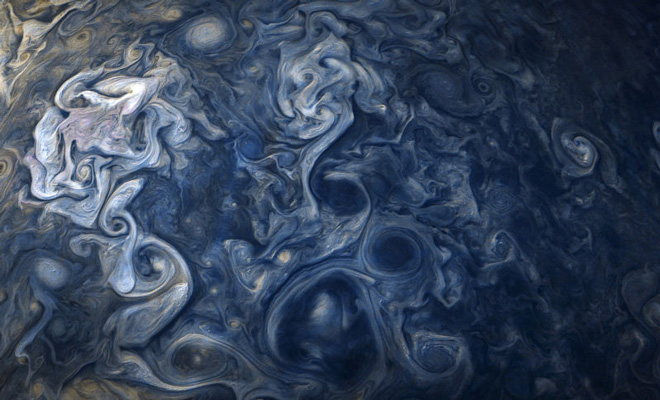 Just look at this incredibly detailed photograph of the clouds of Jupiter, which made the apparatus of NASA “Juno.” The alien landscape will make you forget about everything that happens on Earth. At least for a while.

“Juno” filmed this species on October 27, when it was only 18,906 km above the tops of Jovian clouds. The scale of this image is 12 km per pixel.

Magnificent blue, gray and white vortices look like drops of oil in a pool of water, showing the complex composition of the turbulent atmosphere of Jupiter. “Juno” took this photo just at the moment when the high clouds of the gas giant cast a shadow on the neighborhood.

This region of Jupiter is located in the northern hemisphere. “Juno” overcame three-fifths of the way from the Jovian equator to its north pole during its ninth close approach when it captured this beautiful picture.