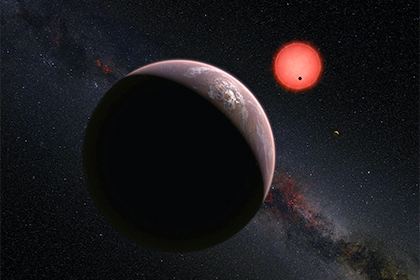 Astrophysics from Harvard University and Harvard-Smithsonian center for astrophysics found that the probability of life in the system of exoplanets TRAPPIST-1 higher than on Earth. To such conclusion scientists have come, having determined the chances of transfer of organic molecules from one planet to another.

In 2016, astronomers announced that they have found a system of TRAPPIST-1, which contains three exoplanets. They revolve around a red dwarf, distance from the Earth at a distance of 39 light years. In February 2017, the scientists reported that the system actually consists of seven planets, three of which are in the habitable zone, that is, they can be liquid water, necessary for life.

Planets in TRAPPIST-1 removed from each other by a distance that is ten times less than the distance of Mars from Earth. According to scientists, it facilitates the process of transfer of organic molecules from one celestial body to another (panspermia). Using mathematical models, researchers showed that a high probability of panspermia contributes to abiogenesis — the emergence of living organisms from nonliving matter.

The researchers also suggested that between the planets can be transported organisms (e.g. spores of bacteria). This increases not only the number of inhabited planets, but the biological diversity of the creatures on them.