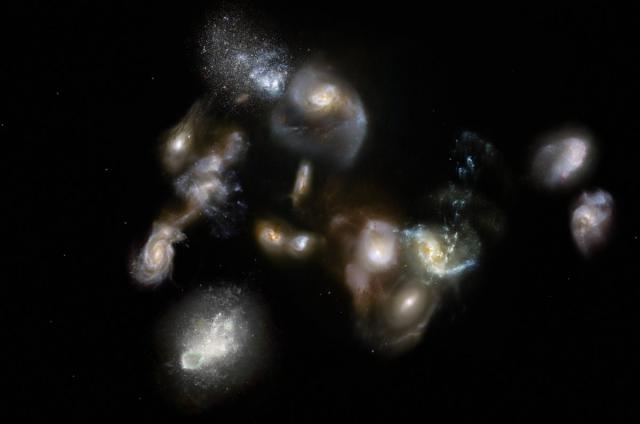 The ALMA and APEX telescopes peeked deep into the Universe, at the time when it was only one tenth of the present, and saw the birth of giant galactic clusters: mass collisions of young galaxies in which starbursts occur, the European Southern Observatory reports. Previously, astronomers thought that these events occurred about three billion years after the Big Bang, and therefore, when new observations showed that in reality the universe in the era of these processes was half as young, it was a surprise. It is believed that these ancient systems form the most massive of the known structures in the universe: clusters of galaxies.

With the help of the ALMA and APEX telescopes, two international groups of scientists: one led by Tim Miller of the University of Duluth in Canada and Yale University in the United States, the other led by Ivan Otheo from Edinburgh University in the UK, found unusually dense concentrations of galaxies that appear to be located in the process of merging and forming the nuclei of future colossal galaxy clusters.

Miller’s group at a distance, 90% of the distance to the boundaries of the observable universe, recorded a proto-cluster of galaxies SPT2349-56. The light from this object began its journey to us when the age of the universe was only one-tenth of the present.

Individual galaxies in this dense “pile” are galaxies with bursts of star formation. The concentration of turbulent star formation in such a compact area is very high: in the entire young universe there has never been such a high level of activity. Every year thousands of stars are born here, while there is only one star in our Milky Way Galaxy.

The Oteo group has previously discovered a similar megaslic of ten dust-rich star-forming galaxies as a result of combined observations on ALMA and APEX. Because of its very red color, this object was called the “dusty red core”.

For the first time, these emerging clusters of galaxies were observed in the form of weak light spots during observations with South Pole Telescope at the South Pole and at the Herschel Space Observatory. Followed by observations on the telescopes ALMA and APEX showed that these objects have an unusual structure and confirmed that they belong to a much earlier than expected, the era of the universe: just 1.5 billion years after the Big Bang.

New observations with ALMA, which have very high resolution, finally revealed that the “spots” recorded on APEX and the Herschel telescope are not isolated objects, but consist of one of fourteen, and the other consists of ten individual massive galaxies, each of which is comparable in radius with the distance between the Milky Way and the neighboring Magellanic Clouds.

Modern theoretical and computer models suggest that massive proto-clusters, such as those just discovered, should have evolved much longer. Using data from ALMA, researchers can simulate the formation of galaxy clusters after less than 1.5 billion years after the Big Bang.