The arrival of the mission “ExoMars” Mars. Video stream 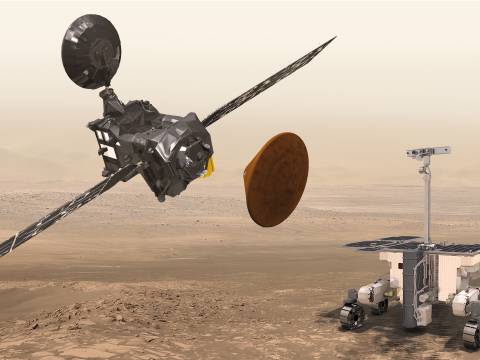 The European space Agency invites everyone to follow the module output of the “trace gas Orbiter” to Mars orbit and landing “, Schiparelli” on the planet’s surface.

Today the spacecraft of the Russian-European mission ExoMars comes to the purpose of his interplanetary flights. As noted by the Russian space Agency, after 226 days and almost 500 million kilometers a module “trace gas Orbiter” will take maneuvers that will allow it to enter the orbit of Mars, and the lander “Schiparelli” enter the planet’s atmosphere for the development of the technology of soft landing.

Recall that the separation of the two modules of the spacecraft occurred two days earlier. Now they have more important task. After entering the orbit and landing on the surface of two new devices, experts plan to begin a vigorous study of the red planet.

ExoMars is a joint program of the European space Agency and Roscosmos. The launch was carried out with the help of Russian rocket “proton-M”. Apparatus “trace gas Orbiter” and “Schiaparelli” constructed by the European engineers.

The whole ExoMars divided into two phases (currently, the first of them). The second phase will begin in 2020 – then there will be another space launch. In the second phase on the surface of the red planet will be delivered built by Europeans, the Rover.