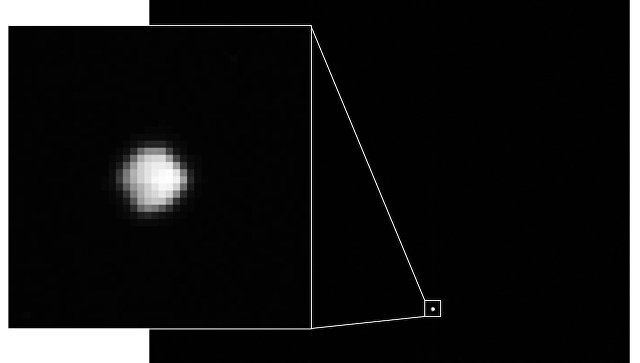 The “Hayabusa-2” probe received new photos of the Ryugu asteroid, where it can be seen that it resembles a puff or pelmeni in its form, JAXA reports.

“Hayabusa-2 is slowly but surely approaching Ryugu.Now the probe is 920 kilometers away from its surface, which allowed us to get a photograph of which the diameter of the asteroid is about 10 pixels.If it is judged from this image, it looks similar in shape to puff or dango, sweet balls from rice dough, baked on a stick, “the scientists explained.

The Japanese device reached its goal in early June and began a long procedure of inhibition and rapprochement with the asteroid. The first photos of Ryugu, received by the probe last week, helped astronomers to clarify the position of Hayabusa-2, but did not allow us to understand what shape and size the asteroid possesses.

New images that the probe sent to Earth tonight turned out to be more successful. On them, the asteroid occupies several pixels, and about a hundred points, which allowed the planetologists to give the first estimates of its shape.

Scientists suspect that Ryugu most likely has a more angular shape and is more like a pelmeni than a round dango ball or puff, as the current photo indicates. This picture, in turn, became special for the Hayabusa-2 team, since exactly eight years ago its predecessor, the Hayabusa interplanetary station, returned to Earth.

The predecessor of the device, the probe Hayabusa, was launched into space in May 2003. This is the only spacecraft that landed and took off from the surface of the cosmic body outside the Earth-Moon system. In 2005, he landed on the asteroid Itokawa, but because of malfunctions, the taking of soil samples was not in accordance with the plan.

His heir, as JAXA experts expect, will return to Earth in late 2020, if all the procedures for the removal of soil are going according to plan, and the capsule with samples of matter will not be damaged when landing on the surface of our planet.

Ground picking, in spite of the fact that Hayabusa-2 has already reached Ryugu, will not happen soon. First, the probe must determine its exact orbit and correct it, if necessary, and then comprehensively study the structure of the earth’s interior and the relief of the asteroid.

Only after this, the interplanetary station will approach the surface of Ryugu and drop a kind of “burst” on it, which will expose and throw out the untouched material from the bowels of the asteroid. “Hayabusa-2” will collect this dust and shingle, levitating in a vacuum, during the second span above this point.