The astronomers worked out the past of the comet Churyumov – Gerasimenko 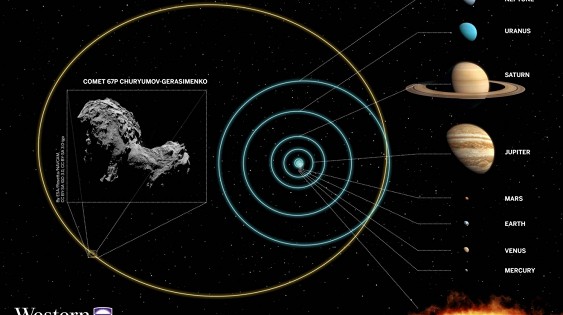 The results of the new work, researchers from the University of Western Ontario, Galiazzo Mattia (Mattia Galiazzo) presented at the 48th annual meeting of the Department of planetary research of the American astronomical society, held in California.

“These findings are the result of calculations, especially complex due to randomness, which are in orbit relatively close approach of the comet with Jupiter, said Galliano. – So many of them are inaccurate, however, make it possible to trace the path of the comet in the past up to the Kuiper belt”.

Short-period comet 67P/Churyumov – Gerasimenko, opened by Soviet astronomers in the late 1960s, became world famous thanks to the European Rosetta mission. 10-year flight of the space probe in the past year culminated in the orbit of a comet and is partially successful attempt landing on the surface of the descent module Philae. According to the calculations of Galliano and his colleagues, 67P is a newcomer in the inner regions of the Solar system, she is here for about 10 years and wouldn’t stay.

67P, scientists have attributed to the group of comets of the Jupiter family, under the strong influence of the enormous gravity of the planet. They have greatly elongated orbits, and most of them spend almost all their time far beyond the orbit of Neptune, appearing in the inner Solar system only about 12 thousand years.

And they all come from the Kuiper belt – a vast and sparse ring of icy bodies, which is believed to surround the Solar system at its far periphery. It indicates the trajectory of 67P, canadian researchers reconstructed more than 400 thousand years in the past.