The atmosphere on Mars disappeared due to the solar wind 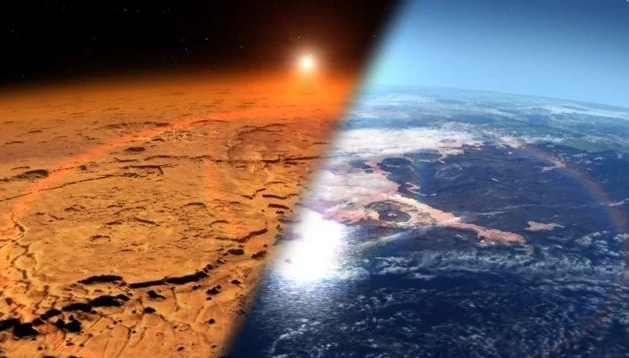 About four billion years ago, when Mars had an atmosphere, it was probably very similar to Earth: numerous rivers and lakes on the planet’s surface bathed in the rays of the Sun, creating the necessary conditions for the emergence of life. But then something happened and the insulating atmosphere of Mars almost disappeared.

Being exposed to the influence of the cosmic elements, the Red Planet over time turned into a dry, frozen wasteland as we know it today. Until recently, the question of what actually happened to the Martian atmosphere puzzled scientists, but the data obtained using the NASA MAVEN mission dotted the i’s. The researchers working on the project estimate that most of Mars’ atmosphere was carried away by solar winds – streams of charged particles that constantly emanate from our star. It is also interesting that the Red Planet continues to lose part of its atmosphere today.

In fact, researchers have known for quite some time that Mars continues to lose the remnants of its atmosphere. But the data obtained with the MAVEN mission indicated how important this process was throughout the history of the planet. Scientists at NASA’s Goddard Space Flight Center have concluded that most of Mars’ atmosphere was lost in space rather than trapped on the planet, which is the main cause of atmospheric loss. The key to solving the mystery was the measurement of the noble gas argon.

Through MAVEN’s measurements, scientists compared the concentrations of argon-36 and argon-38 (atoms with 36 and 38 neutrons) at different altitudes in the atmosphere and determined how much lighter argon-36 disappeared from the atmosphere over time. They then used this information to simulate the effects of the solar wind on other types of molecules in the Martian atmosphere and concluded that about 66% of Mars’ atmosphere has escaped into space in the past four billion years or so.

In the future, the MAVEN team hopes to take a closer look at how other isotopes in the Martian atmosphere have changed over time. Of particular interest to researchers are carbon (because of its insulating properties), as well as oxygen and hydrogen, as they form the other essential ingredients for life as we know it. Interestingly, the concentration of carbon in the Martian atmosphere depends on the time of year, since in winter it freezes into ice on the polar caps, and in the warm season it sublimes into steam. Carbon also enters into chemical reactions, forming various molecules, but argon is much simpler – it just stays in the atmosphere without interacting with other molecules.