The binary mixture with three rings around two stars is found 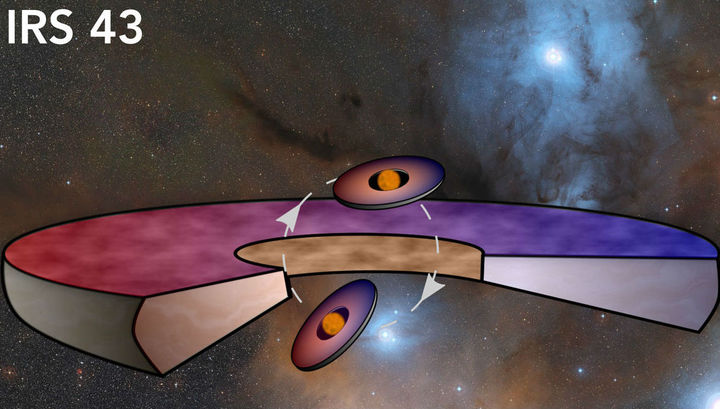 Star with “ring” of the planets rotating around it — the most habitual picture which example is our Solar system and many others, found in recent years in immense space of space. But now researchers from the Danish Institute of Niels Bohr found system, similar which astronomers never saw before.

The system consists of two stars, each of which has an accretionary disk (subsequently it will generate planets). But there is also the third, biggest disk which covers all of them combined. The fancy system called IRS 43 is located in 400 light years from Earth.

In space there are a lot of stars surrounded with planets and planetoobrazuyushchy disks. In other words, today you will surprise nobody with it. Besides, astronomers met also earlier a set of binary mixtures in which each of stars would possess the accretionary disk – the disk rotating around a star from gas and dust. Scientists even know though such worlds and are rare about several planets rotating around at once two stars.

In the IRS 43 system all three disks are slightly inclined rather each other that does all system unique among all observed phenomena in space, Christian Brinch from Niels Bohr’s Institute at University of Copenhagen explains.

Both stars in IRS 43 are rather young and approximately comparable by the sizes to the Sun. Each of them possesses a disk which is also comparable with a size of our Solar system and probably is in process of formation of planets. 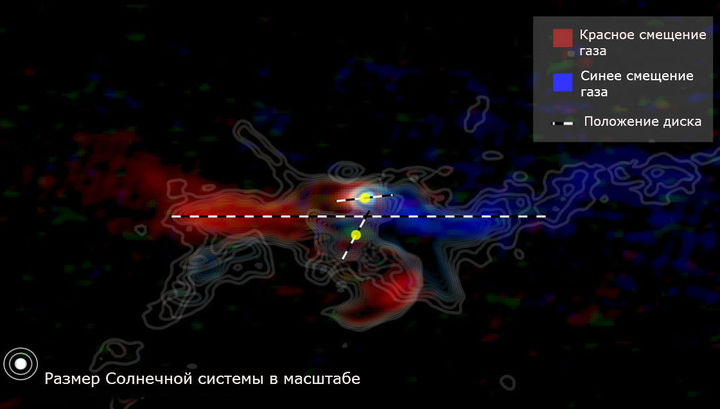 Planets if they are there, cannot be seen directly as they are hidden by the dense veil of dust. Meanwhile scientists can reveal those sites where planets are formed — with it they are helped by network of the Atacama Large Millimeter/submillimeter Array telescopes, located in Chile.

As smaller disks – a question open were formed, tells Brinch. “All three disks were probably created from one material. However it is still unclear, two small disks due to fragmentation big were formed, or their emergence became result of an overflowing of material from a big disk” — the scientist argues.

According to him, if disks “were born” displaced, then the distortion is result of formation process and therefore, it is possible to expect that such systems are very widespread. “However, if the distortion is a result of a rejection the third stars, then it will become really exceptional case” — adds Brinch.

All three accretionary disks move very chaotically, but, according to Brincha, it optional interferes with formation of planets.